A Change of Perspective 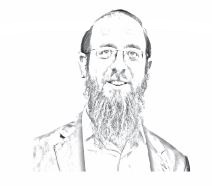 Sometimes the package is so small that the present remains unnoticed. One such present we were endowed with is the power of our mind. Perhaps the most multifaceted and unlimited tool we possess as humans is our mind. Our mind can think, observe, dissect, and process information. But more than all, our minds can be used to define every action of ours. What we think while performing the actions we perform has the power to define their essence.

Even the most mundane actions can be transformed to the realm of kedushah when done with the proper intentions. In the secular world, intention has barely any meaning. Regretfully, we are often influenced by this mindset and measure success by the amount one has produced or accomplished. But that is not the Torah view.

As a talmid of Yeshivas Novominsk this concept has been an important aspect of my chinuch. One of the first speeches a ninth-grader who entered the Yeshivah would hear from the Novominsker Rebbe zt”l, was the borrowing-a-dollar-shmuz, which was dedicated to this idea.

“Let’s say you see someone lending a dollar-bill to his friend,” the Rebbe would say to the young bachurim. “How does the velt look at it? They’ll say he’s a nice guy – he lent his friend a dollar. But al pi Torah this person has fulfilled three mitzvos asei! The Torah says im kesef talve es ami; that’s a mitzvah to lend money to another individual. He was mekayeim v’ahavtah l’reiachah kamochah, and v’halchtah b’drachav, mah Hu rachum af ata rachum – Just as Hashem has mercy on us, so should you have mercy on others.”

The Rebbe would then continue by urging the talmidim to have a Torah’dige outlook on everything they do. “We have to get used to thinking like bnei Torah.”

The Chafetz Chaim once approached the local pharmacist and began praising him profusely. “You know what zechusim you have? You provide good health for the entire town! How many lives have you improved? The zechusim are innumerable!”

The bewildered man sheepishly told the venerated gadol that he was a simple man who was just making a living; he could not fathom that his occupation could bring him any zechusim.

“Just have it in mind,” said the Chafetz Chaim. “If you have kavanah to help people, then you are acquiring endless zechusim!”

And it’s not just a story. The Chafetz Chaim paskens (Mishnah Berurah siman 38), that one who sells tefillin and mezuzos cannot be considered oiseik b’mitzvah unless his main kavanah is for l’shem mitzvah.

I recently met an individual who works in the kashhrus industry for many years. I tried telling him what a great zechus it was to assure that Yidden have kosher food, attempting (unsuccessfully) to inspire him in the same way as the Chafetz Chaim.

“Nah… It’s just a way for me to provide for my family,” the fellow mused. That was the end of that.

Our kavanah has the power to elevate that which we are doing regardless; either by rote or even by lack of choice, for example our responsibilities. In an address that the Novominsker Rebbe zt”l gave to parents of special needs children, some forty years ago, he conveyed this point. “Taking care of these children is a rare and profound form of chesed,” he told them.

The same is true for a regular child or any family member. We have responsibilities to assist them, to sooth them, to provide for them… When we take the children so that our spouse could take a rest, that is no less of a chesed than if we would babysit the children of a family whose parents need to be away for some reason. If we just change our outlook on these “responsibilities,” we have changed and elevated our entire lives.

Some time ago I came across an amazing kuntres, titled Hirbah La’hem Torah U’mitzvos, from the Veitzener Rav of Chicago, were he details countless such mitzvos; while singing in shul, we are mekayem azov ta’azov – we are helping the ba’al tefillah; in business there are countless halachos we fulfill; when we take care of our health or look before we cross the street we fulfill v’nishmartem; when we answer the phone we are practicing v’ahavtah l’re’achah – after all, the caller wants to speak to you...

The benefits of this new outlook are immense. First of all, we take the mundane and raise it to the level of a mitzvah; a mammoth achievement in itself. But there is more than that. Having the correct outlook will undoubtedly change the calculus regarding any decision we make. If the grocer’s primary intention is to provide food for the community, while making money to support his family, he will not seek to take advantage of the consumer. If a morah knows that she is assisting multiple families lead productive lives, she will seek to accommodate them to the best of her ability.

The same is true for every person in every capacity.

It’s not that hard to harness the gift that is our mind to uplift our lives.

All it takes is a change of perspective.

Rabbi Ostreicher is a talmid of Yeshivas Novominsk, where he had frequent opportunities to hear from the Rebbe zt”l. He has written countless articles on many topics, including numerous tributes on multiple gedolim including, but not limited to, the Mattersdorfer Rav, Rav Pinchos Hirschprung, Rav Aharon Kotler, and the Novominsker Rebbe. His writing have been published in various publications, under several pseudonyms. Correspondence, comments and compliments can be communicated to Ostreicherm@gmail.com.