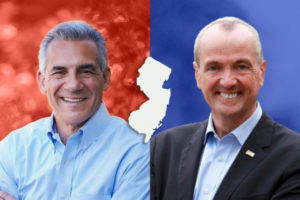 In what is widely seen as a condemnation of the Biden presidency and the progressive agenda, voters in many states chose Republican lawmakers to replace seemingly secure Democrats. Republican challengers pulled off upsets in New York, New Jersey, Virginia, and other governments, leading analysts on both sides of the aisle to declare that the Biden Administration had lost its mid-term elections a year early.

Perhaps most startling to Biden Democrats was the race for governor in New Jersey. Incumbent Phil Murphy was thought to be sure to win reelection easily, but as of this writing, the race remains too close to call.

Conventional wisdom polling had Murphy maintaining a comfortable nine-point lead over his Republican challenger, former state assemblyman Jack Ciattarelli, going into election day. While Murphy’s lead was narrowing, it seemed like an easy victory for the Democrat, who had a strong base of support, a large war chest, and a million more Democrats registered in his state than Republicans. Even in Lakewood, askanim declared that Ciattarelli had no chance of winning, and several forcefully endorsed the incumbent governor, campaigning for Lakewood to maintain its favorable relationship with him.

But when polls closed at 8 p.m. Tuesday, it was anyone’s race. Ciattarelli held a slight lead in early counting, expanding to as much as 42,000 votes at one point. The race narrowed to within a few thousand votes as election night wore on, and both candidates wrapped up their parties without declaring victory. As of this writing, Murphy has opened a 6,000 vote lead on Ciattarelli. Several anomalies have been reported. Bergen county changed its count after 100 percent of the vote had been counted, from 52/47 in favor of Ciattarelli as coverage wound down late Tuesday night, to 51/47 in favor of Murphy early Wednesday.

Why was the race so close? Democrat analysts remain at a loss to explain it, and some have resorted to the fallback position of linking everything to Donald Trump. “There was forty percent higher turnout in red areas of the state than in past elections,” one told the media, “and that was probably because angry Trump voters went to the polls to get revenge for the election they still believe was stolen from them.”

Agudas Yisrael ran a campaign encouraging people to get out and vote, and supported Murphy as a form of gratitude for the governor’s stance on anti-Semitism, support for Lakewood schools through security funding and throughout the pandemic, and more. The team working on the case of Rabbi Osher Eisemann begged voters to come out in support of Ciattarelli, noting that he had publicly promised to free the SCHI founder from the lengthy criminal trial he has been fighting for years. A series of robocalls were issued Monday and Tuesday by the group, debunking rumors that the candidate had not in fact made such a promise, and calling the vote a “mitzvahof lo sa’amod al dam rei’echa.”

New Jersey’s race for governor broke spending records in the state, according the official campaign finance report issued by the Election Law Enforcement Commission (ELEC). While the campaign did not top the record 87.8 million dollars in private funding spent on the race between millionaires Jon Corzine and Doug Forrester, it did see more independent spending than any gubernatorial contest to date.

Over 25 million dollars was spent on political ads and campaign events in the run-up to the general election. Combined with the 13.4 million dollars spent on the primary campaign, spending for this election topped 38 million dollars, eclipsing the previous record of 24 million by 57 percent. The Republican and Democratic Governor’s Associations (RGA and DGA) in New Jersey spent 6 million dollars alone.

As we go to print, the Ciattarelli campaign released the following statement: “Last night was a historic one for New Jersey Republicans, who picked up at least a half-dozen Assembly seats, several Senate seats, along with county and local seats up and down the state. Jack is proud to lead our ticket and our party’s resurgence. Right now, our team is focused on making sure all the legal votes are counted and our citizens can have confidence in the system.”

Two other statewide items were on the ballot Tuesday. On Public Question No. 1, voters chose not to allow an expansion of sports betting to include all college sports or athletic events. A no-vote was submitted by 56.62 percent of voters, while only 43.38 percent voted in favor of the proposed constitutional amendment.

Public Question No. 2 proposed another constitutional amendment, which would allow organizations to use proceeds from games of Bingo, raffles or other games of chance to support their organization. This measure succeeded, with 64.19 percent voting yes, and only 35.81 percent rejecting the proposal.

The only other gubernatorial contest in the nation took place in Virginia, where an unknown Republican challenger handily defeated a former Virginia governor. Although this result was not entirely a surprise, as Democrat Terry McAuliffe had been struggling in polls, it did have the greatest federal impact from Tuesday’s elections. McAuliffe had nationalized the race, making it a “referendum on the Biden election” by calling in President Biden, Vice President Harris, and former President Obama to campaign for him. All three struck out, as Republican challenger Glenn Youngkin, a businessman and relative newcomer to politics, defeated McAuliffe easily in a solidly Democratic state. Virginia went for the Biden campaign by ten points just ten months ago, but Biden’s approval ratings in the state have since dropped to ten points below 50 percent.

Youngkin had campaigned on a promise to give parents the right to have a say in their children’s education, vowing to block Critical Race Theory (CRT) from being taught in classrooms. McAuliffe had made the race about Trump again, repeatedly trying to link his opponent to the former president.

Little Egg Harbor Township Committeewoman Barbara “Bobbi” Jo Crea was elected to the county Board of Commissioners along with incumbent Gary Quinn, who is its chairman and was seeking a second three-year term. Quinn received 137,439 votes and Crea received 133,746 votes, according to unofficial numbers reported by the Ocean County Clerk’s Office. The two defeated five other candidates looking to capitalize on the retirement of Commissioner Gerry P. Little, who announced last December that he would not seek another term this fall after 18 years in office.

On the question of whether Lakewood Fire District should be allowed to borrow 1.6 million dollars for “capital improvements,” which refer to the purchase of a new firetruck, 8,191 voters said yes while just 4,277 said no.

The Toms River Jewish community had a lot at stake in this week’s election for town council and school board, as avowed anti-Semite Daniel Rodrick ran for re-election in Ward 2; and two of his cronies, David Ciccozzi and Karin Sage, ran in Wards 3 and 4. Rodrick and Ciccozzi both won, with Ciccozzi unseating Terrance Turnbach. Ciccozzi garnered 3,976 votes to 2,905 for Turnbach, who was seeking his second term. Sage was defeated by Republican James Quinlisk by a 4,099 to 2,002 margin. Republicans will hold all seven seats on Toms River’s township council in January, having swept all four ward seats in Tuesday’s election. Overdevelopment and property taxes again dominated discussion in what was often a nasty campaign, including personal attacks and inaccurate fliers mailed to voters.

A bitter race for three seats on the nine-member Board of Education ended with incumbents Jennifer Howe and board President Joseph Nardini winning re-election to three-year terms, representing Toms River. Board Vice President Anna Polozzo was re-elected to her second term, representing South Toms River on the nine-member regional board. Howe was the top vote-getter with 7,421, while Nardini received 6,994.

Voters again rejected a ballot question that asked if they wanted to pay 1 cent more per 100 dollars of assessed property  in open space taxes, defeating the measure by a wide margin: 14,551 residents voted “no,” compared to 11,314 who voted in favor of the referendum. The township council had championed the ballot measure as a way to raise needed funds for open space purchases. The council was shocked when voters, who often complain about overdevelopment, rejected a proposed doubling of the tax from 1.5 to 3 cents in 2018. That ballot question was soundly defeated, 17,121 to 11,267. More than 60 percent of voters voted against the tax increase. Council members tried again this year with a more modest increase in the open space tax, but it has been rejected again.

The only local election on the ballot in Jackson was for school board, in which Jewish school board member Tzvi Herman was seeking a three-year term, after winning a one-year term a year ago. Herman was not re-elected, and received fewer votes than each of the eight other candidates. The winners of the three-year term were Erica Osmond (6,527 votes), Tina M. Kas (6,253), and Giuseppe Palmeri (5,248). Herman, who did much for the Jackson Jewish community during his short tenure on the board, received 2,240 votes. A one-year term was won by Allison Barocas, who received 8,843 votes.

Incumbent John Ducey won re-election to the position of mayor of Brick Township, with 17,213 votes to Theresa Gallagher’s 10,019. Two out of three open seats on the town council remain too close to call, with all five candidates within 300 votes of each other. Perry Albanese won a seat with 13,522 votes, but Marianna Pontoriero has 12,908, Heather deJong has just six less with 12,902, and Mary Buckley follows 100 votes later with 12,808. Ernest Arians got 12,685 votes, while Derrick Ambrosino has 12,629.

Victoria Pakala, Stephanie Wohlrab, and Nicole Siebert won seats on the Board of Education.

The red wave affected the balance of power in the New Jersey state legislature as well, with Republicans picking up several seats in the assembly and senate. As of this writing, as many as eight races in the senate have not been called, and Democrats hold just 17 seats firmly, while Republicans hold 15. Senate President Stephen Sweeney, who hoped to increase his power, may have lost his own seat to an unknown non-union truck driver. Democrats remain in control of the assembly, but appear to have lost as many as eight seats to Republicans. Going into the election, Democrats held 52 seats in the 80-member state assembly, but may have managed to hold on to just 44.

Sweeney trails challenger Edward Durr by 2,000 votes, with 99.37 percent of precincts reporting. A potential Republican upset in the usually Democratic-heavy 11th Legislative District looms, as the state Senate race between incumbent Democrat Vin Gopal and GOP challenger Lori Annetta remains too close to call and the battle for the two Assembly seats points toward a Republican victory. With more than 97 percent of the vote in, fewer than 500 votes out of more than 62,000 cast separate Annetta and Gopal, who had 31,754 and 31,264, respectively. Incumbent assembly Democrats Joann Downey and Eric Houghtaling trailed GOP challengers Kimberly Eulner and Marilyn Piperno by at least 3,000 votes each.

It could be days before the full outcomes of close races are known. New Jersey law allows mail-in ballots to be received by the Board of Election up to six days after close of the polls, provided the ballot is postmarked on Election Day.

Lakewood voters went mostly for Ciattarelli, despite endorsements for Phil Murphy issued by the Lakewood Vaad