A Tzaddik in Our Time 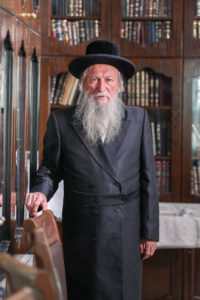 Ben Pidahtzur
Few pleasures in life can compare to exploring the streets of Yerushalayim. From the bustling shuk to the
narrow alleyways, there is always something new to find. The Yidden living there are full of treasures as
well, from the “simple” ones that host bachurim by the dozens to the hidden tzaddik that might be sitting
on your bench in Zichron Moshe.
Right off the famous Malchei Yisrael Street lives such a person. For over 30 years, people across the
spectrum of Yiddishkeit have been visiting Rav Nochum Cohen to pour out their hearts and request
brachos. With a shining smile, he receives them in his house, offering food for the soul and comfort for
the troubles they are going through. For those who have had the chance to meet R’ Nochum, the words
on this page do not do justice to the elation one feels after talking with him. Beyond his counseling and
helping Yidden from far and wide, he is known to Yerushalmi Yidden for his weekly shmuessen, which
are full of bitachon and simcha. In the past year, due to the lockdowns, he has been giving weekly shiurim
in both Yiddish and Hebrew to a worldwide audience.
I once asked R’ Nochum how he married off his 19 children without taking a loan or meeting with
shadchanim.
His answer, like all his advice, began with a dvar Torah.
When the Yidden finally left Mitzrayim, they began their trek with great joy, relishing their newfound
freedom. After days in the desert, their path came to an abrupt end, the Red Sea looming several yards
away. Trapped in the desert, facing the sea, with the hoofbeats of Pharaoh’s army fast approaching, they
cried out to Moshe. The Torah says, “And Yisrael saw the great hand in Egypt.”
What is this Hand that they saw, and why is it relevant to the nes of Krias Yam Suf?
Chazal explain that this refers to many years before, when Pharaoh decreed that all Jewish boys be cast
into the Nile. Basyah, the daughter of Pharaoh, went with her friends to the river. Suddenly, something
floating in the water caught her eye. When she heard the sound of a newborn crying, she approached the
water to rescue baby Moshe.
“What are you doing?” her friends asked. “That basket is way out of reach.”
Undeterred, she reached out. We all know of the nes that occurred then: her hand extended into the
distance and she was able to pull Moshe to safety.
As the Yidden stood by the Yam Suf, they recalled the hand of Basyah, stretched out in spite of the
seemingly impossible situation. That was what inspired them to act and march straight into the ocean.
R’ Nochum explains that there are two things that the Gemara compares to the difficulty of splitting the
sea: parnassah and shidduchim. “My holy rebbi, Rav Eliyahu (Elya) Roth, instructed me that when it
comes to these two matters, I should be extra careful to rely solely on Hashem. In practice, this meant
never taking a loan or meeting a shadchan for my children when the time came to marry them off.
Whenever I needed money, my rebbi would tell me to talk to Hashem and say, ‘Master of the world, thank
You for taking care of me from birth until now. I need money—please help me.’ Similarly, when it came
time to marry off my children, he told me not to even reach out to shadchanim, rather, to daven and place
my full trust in Hashem.”
R’ Nochum adds that the reason the Gemara says shidduchim and parnassah are “difficult” for Hashem,
although we know there is nothing He cannot do, is because when it comes to these needs the natural
inclination is to feel like we are doing the actual work and just asking for Divine help. However, just like in
the case of Krias Yam Suf, we need to work on internalizing that it is all Hashem, and our actions are only
hishtadlus.
R’ Nochum shared, “R’ Elya taught by actions as well as words. Once, when I was learning in the great
Mir Yeshiva, I happened to meet him in the street carrying two baskets, on the way to shop for groceries.
I jumped at the opportunity to spend some time with him and walked alongside him as he chose his
vegetables while sharing stories of gedolim and divrei Torah. As we approached the counter to check out,
he raised his eyes and davened for money. I remembered then that someone had given me tzedakah
money to distribute, so I quickly paid his bill.
“As we walked out I couldn’t help but ask, ‘Rebbi, how did you go shopping with such confidence without
having any money in your pocket? You had no idea we would meet!’
“He looked at me with amazement on his face and replied, ‘And Who do you think sent you to meet me?
It’s not money we need, it’s siyata d’Shmaya!’”

R’ Nochum mentioned another incident relating to his rebbi: R’ Elya’s rebbi, Rav Shlomke of Zvhil, had a
minhag to go to the mikvah before answering certain questions. One time as he entered the mikvah with
R’ Eliyahu, a man standing nearby mocked him. R’ Elya froze, but his rebbi carried on as if nothing had
happened.
As they exited the building, R’ Shlomke turned to R’ Elya and asked him to find out the address of the
man who had just insulted him. R’ Shlome then disappeared for several hours. He returned in the evening
with two sacks full of money. “Please take this money to that man’s house,” he instructed R’ Elya. “A
person who mocks another demonstrates that he has serious troubles. Hopefully, this money will allow
him to return to his senses.”
R’ Elya took the money to the man’s house as instructed. When the man opened the door, his face turned
pale. “How did you know I am in dire need of money?” he asked. R’ Elya told him the story and the man
was stunned. “Now I really know that your rebbi is a tzaddik. I have been suffering so long and have
turned into a bitter person.”
R’ Nochum’s level of emunas chachamim is exceptional. He related a story in which a man approached
his rebbi and said, “We have been childless for many years and it has gotten unbearable for us. My wife
told me not to return home until you guarantee we will have a child.” The holy rebbi looked at him and
said, “If you give me your word that you will stop talking in shul, I will give you my word that you will have
a child.” The man agreed and hurried home to tell his wife the good news.
Less than a year later the rebbi was invited to be the sandak at the bris. While there, someone asked the
rebbi what stopping to talk in shul had to do with the zechus of having a son. He explained that each
person is assigned a certain amount of pleasure, and this man was using up all of his on talking in shul.
R’ Nochum took this message to heart. Years after hearing this story, he was visiting a childless couple.
R’ Nochum asked the man if he would commit to stop talking in shul. “Sorry,” the man replied. “Shul is my
social event, and I cannot give it up.”
His wife heard the conversation from the kitchen and came into the room. She turned to R’ Nochum and
asked, “Do you promise that we will have a child if my husband refrains from talking in shul?”
“I promise,” answered R’ Nochum.
The wife turned to her husband and said, “He is promising us a child, and you are worried about your
friends?”
The man accepted upon himself to stop talking in shul. Sure enough, they were blessed with a baby girl
within the year. The rav of the man’s shul told R’ Nochum that with this request and blessing, he had
done more to stop the talking in shul than years of the rav’s speeches had accomplished.
To read more about this incredible person, see the book 180 Rechov Yaffo by Dr. Meir Wikler.
R’ Nochum is available at his home at 6 Tuval Street in Yerushalayim every Sunday and Tuesday from 7-
8 p.m.
R’ Nochum will be in Lakewood after Yom Tov. For an appointment or more information call 732-267-
9640.
Sidebar: