A Yungerman With A Business 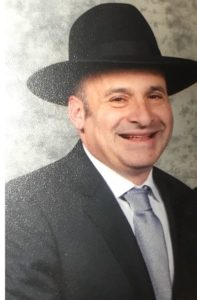 Zelig Terebelo lived to learn. He was a ben Torah and a talmid chacham.He lived and left this world as a true oved Hashem.All the attributes mentioned above were shaped and executed as a desire to do what Hashem wants.

R’ Zelig grew up in Detroit and attended Yeshiva Beis Yehudah elementary school, then went on to Scranton for mesivta, and then to California for beis medrash. From there he went to the Mir in Eretz Yisrael.Zelig’s long-term goal was to learn in BMG—which he did, and he never really left.

Mrs. Terebelo says that as a young kollel couple they did not receive financial support. They lived happily and simply. “We had many nissim during those years.” Mrs. Terebelo says.She relates one such story:Zelig was handy with cars.When they were engaged, he purchased an inexpensive car for pennies, which would never drive because it needed too much repair.When a Blue Cross Blue Shield bill for 625 dollars came in and there was no money to pay for it, the car was sold for parts.The first offer given was 625 to the dollar!Zelig truly believed in Hashem and lived with simple emunah—and Hashem did not let him down.

Years went by, obligations increased, and parnassah was needed. Never one to shirk responsibility, it was time to go to work; but second seder was sacrosanct—never to be missed.Zelig bought a fax/phone answering machine and launched his business—his initial hishtadlus for parnassah. However, each day he would go off to Yeshivah and let the answering machine pick up his messages.Of course,the phone calls—and opportunities for business—came only while he was in Yeshivah. And he was perfectly okay with that. His time was not always used best in the office but rather in the beis medrash.

Although R’ Zelig was no longer learning full-time in kollel, his day continued to start in BMG’s vasikin minyan; a routine he started while learning in Eretz Yisrael as a bachur.He then had a seder until 11 a.m., and only after that would go into the office. He would return to Yeshivah by 3:30 p.m. He made a point of working only what was necessary. The amazing part was that his business grew while he was putting less and less hours into it!It grew even while he insisted on using a 3G flip phone with the ringer off—for messages only or for outgoing calls when necessary —and had no internet access at home.Work was work, but it never took over his life. Because that wasn’t what Hashem wanted.

One of his sons relates, “From the moment we entered cheder, my father was active in showing his love for our learning and helping our rebbeim in any possible way.As a primary student in Rabbi Egert’s class I clearly remember the new Lincoln Logs and other toys that were purchased with my father’s generosity.As a child I beamed with joy that my father had bought the toys. I didn’t know until the shivah that he approached the rebbi of each child and made this offer every year.”

Another son fondly remembers the road trips and family vacations. “Our father didn’t want us to go to camp,” he shares. “He felt that the influences there could be detrimental to us and so he entertained us and kept us happy all summer.”

On one particularly memorable year, the family took a road trip to Alaska. While davening there, R’ Zelig was dismayed to note that the shul did not have a Shas.When they returned to Lakewood, R’ Terebelo visited every sefarim and Judaica store in the area, trying to find someone to deliver a Shas to the last frontier.When no one could accommodate the request, R’ Zelig paid 700 dollars and shipped it off himself via UPS!

As a father who wanted his children to understand the importance and chashivus of Torah, he would travel to learn with each child once or twice a month; whether in Long Beach, Brooklyn, Monsey or even Eretz Yisrael. These trips were not for pleasure, but to learn and visit his children.

Reb Zelig was not a businessman who learned; he was a yungerman with a business.He had a tremendous simchas hachaim and related to all types of people. He was an exceptional Yid, always doing ratzon Hashem in the most simple and extreme ways. He had no airs about him and he never accepted any accolades.

The Terebelo family is working on publishing a book in R’ Zelig’s memory. If anyone has a story to share regarding his simplicity, his tzedakah, his chessed, the way he dealt in business, or his learning, please send your submissions to z.terebelo@gmail.com.