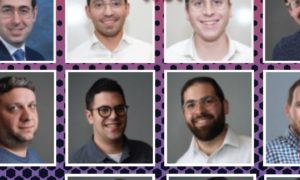 The squeakiest wheels get the grease.

Is it any wonder that the (literal) wheel greasers get the least grease themselves?

Chaveirim of Central Jersey—formerly known as Lakewood Chaveirim, though they’ve outgrown that description as Lakewood’s borders have expanded—have been keeping the town running smoothly for years. However, while their impact on the community is unrivaled, the extent of that impact is largely (and regrettably) unrecognized.

After nearly two decades of quietly and selflessly providing support within and beyond the broader Lakewood region, it’s time to reintroduce Chaveirim to the masses.

Here’s what (you think) you know about Chaveirim:

They’re the ones to call when you’re locked out, worn out, or stressed out.

They’re a nice team of guys who spend their days waiting for people to call for help.

Here’s what you don’t know about Chaveirim (yet):

They answer dozens, if not hundreds, of calls on the average day.

They are called upon to resolve the most unusual situations.

Their team is comprised of carefully vetted volunteers who span the entire spectrum of “types,” united by an innate desire to help people despite their busier-than-average schedules.

And they need your help.

Here’s what happens when you call Chaveirim:

You run into an issue, so you dial the number. A friendly dispatcher answers the phone and broadcasts the call to the members, and a little while later a kindly volunteer arrives, fixes your problem, and returns to patiently waiting for the next call.

You dial the number, and a friendly dispatcher puts another caller on hold to answer your call and determine if you’re in an emergency situation. He or she sends out the call to the members while picking up the next call. A nearby volunteer stops by on his lunch break, on his way home, or on his way to his next errand (or takes pity on you and takes the time to drive out and rescue you even when it’s inconvenient). If it’s an emergency, several members drop what they’re doing—working, spending time with family, enjoying a rare moment of relaxation—and rush to your aid.

They come, do their thing, and leave without fanfare, pausing their day so that you can get on with yours.

Surprised yet? That’s just the beginning.

You may think you know the answer to that one, too. It’s a group of young, community-minded adrenaline seekers impatiently awaiting their next adventure. Or is that also a misconception?

Sure, there are fresh-faced new recruits; there are also veteran members who could technically be those recruits’ fathers. Among the 150-plus members, you’ll find blue-collar workers and white-collar workers, kollel yungeleit and rebbe’im, professionals and businessmen, students and entrepreneurs. There are Ashkenazim and Sephardim, Chassidim and Litvaks, lifelong Lakewood residents and out-of-town imports. Name a segment of society and there’s a Chaveirim member who represents it.

Despite their differences, they’re a motley yet cohesive crew, a big, happy family drawn to each other by their shared aspiration to help others.

Beyond the flat tire

So just what is it that Chaveirim does that keeps its members so busy?

Sure, there are the normal flat tires, dead batteries, home and car lockouts (of both the standard and emergency child-locked-inside varieties), and other common problems. Then there are the decidedly uncommon calls, the ones that come from callers who don’t know where else to turn (the nature of many of those calls can’t be printed in these pages, to protect the innocent and the not-so-innocent).

If you’re fortunate enough to catch a member with some downtime, ask him to share his most memorable call with you. (Bonus points if he’s a dispatcher too.) Then prepare to be astounded.

Countless needs; one organization that responds to them all.

When the world closed its doors and society huddled at home against the onslaught of the novel coronavirus, Chaveirim immediately sprang into action. In its signature fashion, Chaveirim anticipated the needs of the community during a time when most people were most concerned about themselves and their families.

To brighten the dark and bewildering days, the organization rigged over 30 trucks—both Chaveirim vehicles and members’ private cars—with speakers and set out to play music on the streets of Lakewood, injecting gloomy Erev Shabbos hours with joy and excitement. The “music trucks” paid special visits to homebound bar mitzvah boys deprived of their big day and brought simcha to countless homes struggling with fear and uncertainty. This brilliant idea, the brainchild of Rabbi Avrohom Lefkowitz, caught on quickly and spread to cities across the United States and countries around the world, reaching as far as Eretz Yisrael and even Australia.

As Pesach drew closer and the lockdown dragged on, Chaveirim, in conjunction with Beth Medrash Govoha, launched the Pesach Box initiative, supplying hundreds of first-time Pesach makers (as well as pressed-for-time Pesach veterans) with everything they needed, hassle free. This successful project was quickly followed by the post-Pesach Chametz Box and Shabbos Box initiatives.

While standard locked-out-of-the-house calls dwindled due to the stay-at-home orders, less typical—and more complex—calls increased dramatically. Chaveirim members provided lifesaving services to the homebound and at-risk, supplying medical equipment, medications, and other vital necessities to numerous people who found themselves helpless in the face of a pandemic.

And when the school lunch distributions began, flooding the streets of Lakewood—or, at least, the school parking lots—with cars once again, school administrators knew exactly where to turn. Chaveirim members distributed (and continue to distribute) thousands of meals weekly, applying their expertise and care to keep the cars moving as quickly as possible.

The average Lakewood resident calls Chaveirim when the need arises, often without a second thought. But the average residents are not the only ones; schools, businesses, activists, and organizations know they can count on Chaveirim to help with crowd control, distributions, and safety procedures, and the police and fire departments call regularly for assistance with rescue operations and for a reliable, rapid response to virtually any situation.

Despite the public’s limited knowledge of the full scope of its reach, Chaveirim is the organization that people call when they’re not sure who else to call.

And now Chaveirim is calling you.

It’s easy to forget that the strongest among us also require support. They’ve become so adept at supporting you that you may have overlooked their needs.

Chaveirim doesn’t ask for much; they’re not paying salaries to their hardworking coordinators or selfless members. But the annual budget adds up quickly, especially as they welcome new members to keep up with the ever-rising demand. Between insurance, communication equipment, tools, vehicle maintenance, and administrative costs, Chaveirim operates at a minimum biannual budget of $400,000.

These funds are essential; they enable Chaveirim to continue carrying the community through every challenge that arises. Your contribution benefits an organization whose main goal is to help you; when you donate to Chaveirim, you’re essentially donating to your own family.