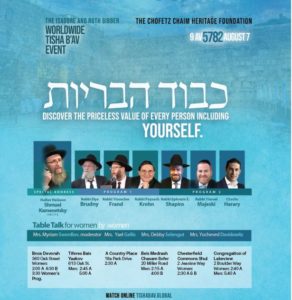 How we relate to others depends on one factor: what we see when we look at them. Annoying, difficult, not my type leads to sinas chinam. He’s Hashem’s creation leads to kavod—honor and respect.

That is why on the day we mourn the Churban,the national tragedy which, according to Chazal, arose from sinas chinam,nothing can be more meaningful than learning how to erase this destructive trait from our hearts.

The Chofetz Chaim Heritage Foundation, which has been uplifting the experience of Tishah B’Av for Jews around the world for the past 27 years, goes to the heart of the matter in this year’s worldwide event seminar presentation on kavod habrios—honoring Hashem’s creations.

This means recognizing the tzelem Elokim—Hashem’s image—in every person. When we do so, we encompass everything Hashem wants from us in our interactions with each other—ahavas Yisrael, shemiras halashon,and shalom.

It’s also the ultimate key to blessing, because when we see the spark of Hashem in each person and honor it, we are honoring Hashem Himself. Moreover, kavod habrios is the key to our own happiness, confidence, and productivity in life, because every person needs honor and respect to thrive.

Each year, CCHF brings to 50,000 participants worldwide speakers of the caliber that has become its trademark—speakers whose power and insight have been moving audiences year after year. Each year, CCFH is inundated by post-event reports from people who testify that the event has helped them make lasting change in their lives. The worldwide event gets to the heart of Tishah B’Av by reaching the heart of every Jew with the day’s most essential message.

This year’s event, titled, “Kavod Habrios: Discover the Priceless Value of Every Person,” covers thought-provoking topics including the limitless potential that comes with being a tzelem Elokim, how honoring others makes a person beloved and honored, and strategies for building a kavod habrios perspective.

Kibbud av v’eim, a particularly vital and challenging aspect of kavod habrios, receives its own focus in a high-impact presentation by Rabbi Ephraim Shapiro. The lecture, four years in the making, presents this mitzvah in a new light and provides essential tools to enable everyone—parents and children alike—to reap the benefits of this fundamental mitzvah.

A recent addition to the worldwide event is the women’s panel, which this year will examine the topic of kavod habrios from several unique angles. The panel, created for women and by women, is comprised of Mrs. Debbie Selengut, assistant principal of Bnos Bracha of Passaic; Mrs. Yael Gellis, machaneches in Arot Bais Yaakov in Lakewood; and Yocheved Davidowitz, a therapist in private practice and educator in Cleveland, Ohio. Panelists will discuss intriguing subjects such as maintaining respect for those who challenge our self-control, acknowledging those around us when digital devices tug at our attention, and teaching respect to children in an age when boundaries are blurred. Both the main event and the women’s panel will be shown at live venues and online.

A further Tishah B’Av offering is the neighborhood event for children. This video presentation, “The Yarok Effect,” focuses on jealousy and the proper attitude toward material possessions. Its potent message comes across in an entertaining, engaging story that speaks to the real world of children as they find their place among siblings and peers.

All three presentations aim at making Tishah B’Av a reset moment in our lives. They help us examine our relationships and attitudes toward others and show us the heights we can potentially reach when we connect to each person as a tzelem Elokim.

The greatest luminaries of ahavas Yisrael have always been those who “see through the guf right to the neshamah,” no matter how challenging a person might be. They are the people who heal and uplift others and those we can each emulate so that we can build a world of honor, respect, and dignity—a world ready for the Geulah.

Year after year, the Tishah B’Av event generates major improvements in shalom and achdus throughout Klal Yisrael. CCHF receives many firsthand reports of these changes, coupled with tremendous gratitude for motivating people to take what are often difficult steps.

One year, the topic of forgiveness was the focus on the annual worldwide Tishah B’Av event. Rabbi Ephraim Eliyahu Shapiro spoke, awakening audiences around the world to the damage we do to ourselves and others when we hold onto grievances against people who are meaningful in our lives. The grievance, he explained, takes up space in our heart, filling it with ugliness and pain. In its place could be a warm relationship that would fill us with happiness. Why choose pain?

Listening to this address at his local Tishah B’Av event was a young man who was estranged from his parents. In a different location, his parents were hearing the same message as they participated in the same program.

That very day, the parents called their son. The son responded in kind. The right words at the right time helped parents and their son make what they all knew was the right move.

She won big by giving in

When Aviva came home from the CCHF Tishah B’Av event that focused on vatranus—the trait of yielding to others rather than enforcing our own rights—she was moved. She wanted to be that kind of person—the one who would smile and say, “No problem,” and move on.

That night, she got her chance.

The organizer of a big fundraising event that was to take place in Aviva’s home in four days called to say that the event had been canceled. Aviva’s first reaction was to think of all the work she had done to prepare that would now go to waste. But then she remembered that she had decided to build the trait of vatranus. “Im yirtzeh Hashem,we’ll do it some other time,” she told the organizer.

That night, at 3 a.m., Aviva’s husband suffered a massive heart attack. Although she knew it was serious, she did not realize that he needed help within a narrow three-minute window in order to avoid long-term damage or worse. She called Hatzolah.

Unbeknownst to her, earlier that day, a boy who was in the Catskills had become very ill. Hatzolah had brought him to the Children’s Hospital of Philadelphia in a truck equipped with advanced life-saving equipment. At 2:45 a.m., their mission completed, the EMTs were on their way to their homes in Lakewood. Due to exhaustion, the driver had missed the exit. He’d gotten off the highway and turned back, arriving in Lakewood a little after 3.

That’s when Aviva’s call had come in. The drivers were moments away, equipped with just what was needed to save her husband’s life.

Although we can’t possibly know Hashem’s cheshbonos, the timing of the two events left Aviva feeling that her vatranus, aimed at keeping shalom, reaped an award immensely greater than anything she had given up.