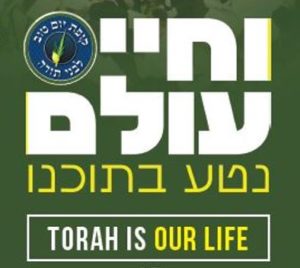 The wind blew through the trees

Shaking the branches with a mighty breeze.

Up on the tree sit two leaves

Huddled together to find reprieve.

From its place it rips off and falls.

Her friend looks on in disbelief,

Green with envy of the other leaf.

She watches her partner revel in the sun,

Twirling and prancing—oh! How fun!

“And I am stuck here in my place,

How I wish I could join the chase.”

It didn’t really take that long

To realize that her envy was silly and wrong;

Her friend now lies crumpled on the ground

Its beautiful color faded and browned.

“But I sit here tightly attached,

To the source of life I remain firmly latched,

I am the one that is truly free—

My source of life is Eitz Chaim hee.”

Choices. Our lives are full of them—to give in to the pull of societal pressures, to succumb to the winds of foreign temptations, or to stay connected to the Eitz Chaim. When understood correctly, these choices are not about restrictions or limitations; they are a choice between fleeting pleasure and eternal life.

These choices are often small ones—how to speak, act, or think. But then there are the consequential choices that we sometimes face: Which lifestyle to choose? Where to place the emphasis of our lives? How to raise our children?

No other group of individuals makes a choice to sacrifice as much for the Eitz Chaim as our cherished yungerleit. They choose to devote their entire lives to limud haTorah, to shun honor and disregard material comforts for the sake of clinging to the source of life.

And their choice not only connects them to eternal life, it elevates their entire surroundings.

Their choice is a source of pride for us.

Shuey had a secret fascination with the two yungerleit who learned night seder in the shul on his block. He didn’t even know their names; perhaps that just added to the mystique.

He loved seeing them argue animatedly over a sevarah, losing themselves in their pursuit of truth. Most nights, the two would remain glued to their seats, focusing intently on the sefer they were learning. But sometimes the scene was different, and Shuey loved to watch. The two would be practically dancing around the shul, bringing various sefarim back with them as they sought to clarify a sugya, their voices raised, their eyes shining brightly.

He marveled at how real it was for them, how it was not just something they spent most of their days occupied with, how it took over their lives, how it was their lives.

Shuey also enjoyed learning. He was meticulous about his nightly seder, even when he had to fight his eyes to prevent them from shutting on him. After all, it was his lifeline. He knew that without this seder, his life would look different. His family knew it as well. It was a sort of joke in the family—when he would leave after supper, his kids knew that he was going to “recharge his batteries.”

But these yungerleit were something else. He couldn’t put his finger on it exactly, but he knew that the Torah was their life. When his 10-year-old Shloimy asked him what it means that “Torah is our life,” he was able to point to these yungerleit as a model of that ideal.

It was quite obvious that material extras were not something that they could afford, but it was equally obvious that they were not bothered by that fact. They had made a choice to live a life of v’chayei olam nata besochenu.

The thought flitted through Shuey’s mind that night as he once again found himself looking their way while putting his Gemara back on the shelf for the night.

Are they enticed at all by the call of the wily fox, beckoning them to join him on the shore? Or are they so immersed in the sea of Torah that they don’t hear him at all?

The answer didn’t really matter. Shuey reveled in the ability to observe them, warmed by the knowledge that their avodas hakodesh deepened his kesher with the Eitz Chaim.

It was a few days later when one of the yungerleit’s wives opened the mailbox and noticed the envelope.

She knew the feeling by now. Each year when the envelope arrived, she felt it again.

Her husband was one of those “adirei haTorah,” who spurned all for their love of Torah. He remained out of the house until very late each night, and she loved it. Not that it didn’t come with sacrifices on her part. It wasn’t easy living on a shoestring budget, nor was it easy to juggle almost all the household affairs by herself. But she was content. It was a choice she had made and continued to make with pride each day.

Making Yom Tov had its extra stresses on their budget, and she was ready to make do with less. But when she realized that there was someone out there who wanted her family to enjoy Yom Tov to the fullest, someone who appreciated her and her husband’s sacrifices, it touched her in a special way. In a sense, it made her even more willing to continue supporting her husband in his sacred role of upholding the Eitz Chaim of Torah.

Kupas Yom Tov was founded with the goal of ensuring a beautiful and befitting Yom Tov for our cherished bnei Torah. We aim to ensure that these special families, who sacrifice so much throughout the year to dedicate their lives to Hashem and His Torah, are able to make Yom Tov with dignity and royalty.