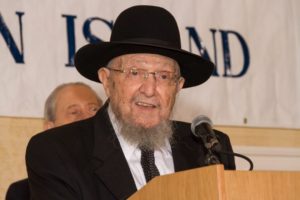 Whoever was there to witness it will recall the moment fondly. Rav Shmuel Kamenetsky shlit”a stood at the podium in MetLife Stadium on that freezing day almost a year ago. The venerated Rosh Yeshivah was honored with being mesayem Shas and was about to begin saying the Hadran.But first, there was a message that he wanted to relay. In front of the multitudes assembled, he thanked “my dear friend Reb Dovid” for bestowing upon him the honor of being mesayem. “It’s not easy giving up a kavod like this one,” the Rosh Yeshivah said, “and I would like to thank him for that.”

It was a rare glimpse into the camaraderie and love that existed between two of our generation’s greatest. More than that, it was a window into the humility that was a trademark of the gadol Rav Dovid Feinstein zt”l. A towering gaon whose psak was revered throughout the Torah world and an address to the thousands who sought his guidance on any issue, Rav Dovid, with his short jacket and bent-down hat, appeared as just another elderly gentleman. True, he had been offered the once-in-seven-and-a-half-years chance to recite the Hadran,a kavod befitting the undisputed posek hador,but he’d decided to give it away.

Rav Dovid was raised in a home of outstanding gadlus whichwas cloaked by a veil of pashtus and anavah. One talmid of the Rosh Yeshivahpointed out that on the first page of every sefer Rav Moshe Feinstein zt”l wrote, he signed his name as Moshe Feinstein ben Hagaon Hatzaddik Hechassid Ha’anav Rav Dovid zt”l. Like his namesake, the Rosh Yeshivah Rav Dovid was the epitome of anavah.

It wasn’t only his background that influenced Rav Dovid to hide behind a mantel of humility, pashtus, and often, silence. Rav Dovid would relate in the name of his father that one can learn a lot about his tafkid in life by studying the maftir of his bar mitzvah parshah. Indeed, Rav Dovid’s bar mitzvah parshah was Behaaloscha, whose maftir tells of Miriam’s lashon hara against Moshe Rabbeinu. For Rav Dovid the message was clear: keeping quiet was something that he would strive for his whole life. It became his defining trait, often hiding his breathtaking knowledge in Torah.

A gabbai related that on an average day, Rav Dovid would get between five and ten calls that pertained to life-and-death matters! This was in addition to countless questions on other halachos, from ribbis to geirus, from Choshen Mishpat to safrus. Each and every one would be answered immediately with clarity and precision.

Rabbanim knew that if they needed clarity, Rav Dovid was the one to turn to. One of the Rosh Yeshivah’s great abilities was his ko’ach to be machria between various shittos in the Poskim. A talmid chacham could come into the Rosh Yeshivah’s room after preparing an entire list of different opinions on a sugya and walk out a few moments later with a clear mehalech.

It was not only the young rabbanim who would turn to him for guidance in psak halachah; gedolei Torah would wait to hear his final decision, knowing that it was reached with the breadth of knowledge and keen insight that few possessed. It is said that even Rav Elyashiv would often consult with Rav Dovid on difficult halachic matters. Furthermore, the esteem with which Rav Dovid’s own father held him is legendary. In fact, Rav Moshe quotes his son approximately 200 times throughout his sefarim!

His brilliance was recognized in the secular world as well. A gentile professor who taught astronomy at MIT once called the Rosh Yeshivah after perusing the latter’s English sefer on kiddush hachodesh. The professor, who was astounded at the magnitude of the Rosh Yeshivah’s all-encompassing work on the constellations and the lunar and solar calculations, wanted to speak to him about two errors that he thought the Rosh Yeshivah had made. Rav Dovid calmly explained to the astonished professor why he wrote what he did and how the professor was mistaken.

He didn’t seek to be heard, though. One longtime member of the Moetzes Gedolei HaTorah related that at the meetings of the Moetzes, Rav Dovid would invariably remain silent, only speaking up when called upon. But once he gave his psak, there was no arguing. A man of few words, his were the final words; he was the posek ha’acharon.

The high regard with which he was held did not cause him to consider himself privileged in any way. After Rav Moshe’s petirah, Rav Dovid refused to sit in his father’s seat, considering himself unworthy of the kavod. He was content to be the friendly old man who would stop everything to give a small child a smile or sign the cast of a young boy who’d broken his hand. And if a boy wanted a picture with him, the Rosh Yeshivah would be in his element. He would look at the camera with a smile and then wait to ascertain that the photo had come out the way the boy hoped it would.

Despite being a tremendous talmid chacham who would answer she’eilos from across the world, Rav Dovid never carried himself in a manner that might clue in an unknowing bystander as to his true stature. On one occasion, a man came to speak to Rav Dovid. He waited outside the beis midrash until shiur was over, but when he walked in after shiur, he did not see anyone sitting at the head of the table. Perplexed, he turned to the gabbai and inquired where the Rosh Yeshivah was. When the gabbai responded that Rav Dovid had already walked out, the man suddenly realized that he had actually seen an elderly man with a short jacket leaving the room. It had not crossed his mind that that man could be the Rosh Yeshivah.

There were no airs about him. His warm smile had the power to put one at ease while talking to him about the most serious topic. And his concise and concrete answers, often coupled with soft humor, did not leave any room for doubt.

The Rosh Yeshivah had the time and tolerance for any individual with any issue. People of all ages and stages would come to speak to him about whatever was on their mind. Nothing could faze him; he would just sit there with the patience of Hillel and respond softly.

A member of the staff once complained to the Rosh Yeshivah that a curious frequenter of the yeshivah, who had a knack for storing leftover food all over the building, was getting on his nerves. “Daven to the Ribono Shel Olam to give you ko’ach to deal with him,” was the Rosh Yeshivah’s advice, providing the staff member not only with a practical solution, but also with invaluable insight into the gadol’sapproach to matters such as these.

Still, as soft as he was, when he felt it was appropriate to take a stand, he did so fiercely. On matters of technology, Open Orthodoxy, and other threats to our community, Rav Dovid was not one to budge easily. He would state his opinion unequivocally and unabashedly.

Whenever someone would inquire about the gadlus of his father, Rav Moshe, Rav Dovid’s response was, “His gadlus in Torah is impossible for us to reach, but his middos are something we could all learn from.” The same can be said about Rav Dovid. His outstanding bekius, his phenomenal command of every topic in Torah, the clarity with which all of it lay before him…it is unlikely that any of us will attain these. But the Rosh Yeshivah’s pleasant way of life, the way he extended himself to others, and the simplicity with which he conducted himself despite being the leading Torah authority of the generation—these, we can certainly seek to emulate.

Thank you to all those who helped with this article, including Rabbi Yissachor Ginsberg, Rav Dovid’s trusted personal attendant for decades. Rabbi Ginsberg has asked that anyone whom he helped reach the Rosh Yeshivah please email him a brief recap of the incident. The email address is ysgin@aol.com.

As per the guidance and bracha from Maran Sar Hatorah Rav Chaim Kanievsky shlit”a, the entire Shas Bavli will b’ezras Hashem be completed for the shloshim of the Posek Hador, Rav Dovid ben Harav Moshe Feinstein zt”l. To reserve a daf please visit ShasHadchak.com or call 757-663-7427.