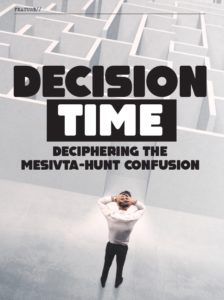 If you are a parent who has reached the stage of finding a mesivta for your son, you definitely have what to be grateful for.

And if you haven’t yet reached that stage, you have what to be grateful for, too.

Choosing, and getting into, the right mesivta is quite a challenge for both the bachur and his parents. With the number of new mesivtos increasing at a dizzying speed, deciding which is the right one is in and of itself a difficult ordeal; then comes preparing for the farher, taking the farher, the waiting game after that, and the chance of rejection. TVOL attempts to navigate this delicate topic with some facts, guidance, and perspective.

The first question any parent embarking on the road to finding a yeshivah for their son must contend with is where to send him. The bad news is that there are currently some 50-plus yeshivos in Lakewood, making the prospects of going through the details of each one an overwhelming and impossible task.

The good news is that parents are not alone. Most eighth-grade rebbeim know the ins and outs of each yeshivah and stand ready to assist the parents in what could possibly be the most consequential decision of their child’s chinuch yet. Many menahalim are very knowledgeable—and helpful too. Parents can discuss the options openly with these mechanchim, and then begin the process of applying to the right yeshivah(s) accordingly. Generally, the cheder sends home to eighth-grade parents a list of all the mesivtos—both in-town and out-of-town—they feel best fit their student body, giving the parents a chance to study, analyze, and look into them.

The parents and rebbi will undoubtedly take many factors into account when making their decision. First, what level of learning and frumkeit is most suitable for the bachur in question? What type of personality is the bachur? Is he the type that thrives under pressure or does he do best when he can move at his own pace?

While the number 50 sounds huge, the mesivtos can be split into different categories and types. There are some that have secular studies to varying degrees, the intensity levels differ, the style and flavor are not identical, and the rebbi–talmid ratios vary. There are different yeshivos with different cultures and different social norms. There are some yeshivos where the bachur will, for the most part, need to fend for himself, as the classes are large and the rebbi’s attention is split between all the bachurim.

Parents of a bachur who is looking for a less intense setting need to know that their decision is just as significant, if not more significant, than that of parents of a more intense, higher-level learner. First, the variations in yeshivos that cater for this clientele are much greater than the other type of yeshivos. Second, and just as important, the parents must ascertain that the yeshivah they choose is serving that clientele by choice and not by default. Many new yeshivos accept all sorts of bachurim to fill spaces, but do not specifically cater for a boy who needs more guidance and encouragement. Parents must proceed with caution to be sure their son will receive the proper chinuch that will propel him to reach his full potential. There are many yeshivos that specifically seek to help these boys with extra care and concern.

One of the factors parents are advised to take into account is their son’s own assessment of the options. While he need not have the final word, he often knows something—whether about himself or the other bachurim going to a certain yeshivah—that the parents might not know. This is especially true about the social aspect of the prospective yeshivah. Your son might know that if he goes to that yeshivah, he will not be able to keep up with the peer pressure there, or that the other bachurim might not have the best impact on him. Just because it’s the best yeshivah in town, it doesn’t mean it is the best choice for him.

A serious ben Torah who wants to shteig may be very intuitive to the matzav; if he feels like a certain yeshivah is not for him, it’s worth taking into account. Not always is it easy. Parents sometimes have a tendency to overestimate their son and feel like he belongs in the most serious and intense yeshivah around. But the son might know he will be intimidated there, and that he will not be able to keep up with the learning level of such a yeshivah. Listening to the voice of truth over the niggling voice of one’s own pride is never easy. But it is the smart thing, nevertheless.

There are many cases where a bachur who would be overshadowed in an intense, high-paced yeshivah would blossom and shine in a slightly less intense surrounding. For some, being the top of the class is what makes them feel good about themselves and gives them a drive to shteig. Similarly, there are those who, when placed in a yeshivah where they feel less challenged, will lose steam; they thrive on competition and pressure.

A parent should never base their decision on any one factor. A boy might be pressured by external factors to claim that he fits into a specific type of yeshivah, when, in reality, this would not be a good choice for him. Guidance from someone who knows the mesivtos, the bachur, and the entire parshah is of highest value.

Figuring out which yeshivah is best for your son is only a fraction of the issue parents must contend with. Now comes the real fun—getting in. Or trying to get in, that is. Unlike elementary schools where having a sibling in the school all but guarantees the next child’s acceptance, mesivtos, for the most part, do not work that way. The system is very much merit based; even if an older boy learned in the yeshivah and did very well there, the next brother may well be rejected if he is not on the same level as his older brother.

One piece of advice every mechanech will suggest to parents is to apply to at least one yeshivah where they know with certainty their son will be accepted. Doing this has the potential to spare the parents much heartache if, for whatever reason, their son is not accepted to the yeshivah they had hoped—and expected—he would get into. Even if your son is a top bachur in every respect, there might just not be any room in the yeshivah you applied to. In a sense, just as the parents are overwhelmed with the choices they face, the mesivtos are in a similar predicament. They receive hundreds of applications and are forced to choose a limited amount of bachurim from among them.

Being stuck in such a situation is not a good idea. By the time you find out the mesivta of your choice has decided not to take your son in, the others will not be taking applications anymore—leaving the boy stranded. Not a pleasant place to be in.

Additionally, says Rabbi Elya Meir Schmeltzer, Menahel of Yeshivas Orchas Chaim, when the rebbi gives his suggestion on which yeshivah to send your son to, don’t knock any of the choices. “It’s very likely that that is the one your son will end up in.”

So what can a parent do to help his son get into a mesivta that is suitable for him? Perhaps the most crucial factor in the yeshivah’s decision whether to take a bachur or not is how he performs in the one-on-one meeting he has with the bochen of the yeshivah: the farher. If a bachur does well on the farher, his chances of getting in are good; if he underperforms, the case is usually closed. If he wants to stand a chance of getting in, the bachur must know the material expected from him to the very best of his ability. Often, bachurim who didn’t have great prospects of getting in to a yeshivah do phenomenally well on the farher and get in as a result. And the opposite is also true.

There is no cookie-cutter answer to what the mesivtos are looking for. Each yeshivah wants to ascertain that the potential talmid will be a good fit for the yeshivah and grow in learning. One key point the yeshivos try to figure out is whether the bachur learned well throughout the year. They are likely to ask the bachur questions on everything he learned that year to get a feel for his participation in class.

Each mesivta has different standards they use to see if the bachur is suited for their yeshivah. Some want to see that he knows every blatt learned in class with immense clarity; every Tosafos and meforash neatly arranged in his mind. Others have easier requirements. These standards are known to any rebbi or mechanech guiding the parents along, and should not be difficult to determine.

The difficult part is making certain your son knows the material well. Many parents who do not have the time to chazer with their son enough before the faher will opt to hire a yungerman to learn with him until he is sufficiently prepared.

While everyone agrees that the decision should not be taken lightly, at the end of the day, Hashem is in charge. It is impossible to really know if your son will have hatzlachah in the yeshivah he ends up going to. Will he connect to the rebbi, will he get along with the other bachurim, will he be matzliach? It is all in the hands of Hashem.

All that matters is whether the bachur will be happy and learn well. Parents are often surprised when their son succeeds beyond their dreams and hopes—even if he doesn’t learn in the yeshivah they had initially hoped for. And that is what counts most.

If you get stuck, there are askanim who can help. But the best idea is to proceed wisely, with the guidance of a mechanech and a tefillah on your lips.

“The main thing to know,” says Rabbi Schmeltzer, “is that the Ribbono Shel Olam is in charge, and wherever you end up is up to Him.”