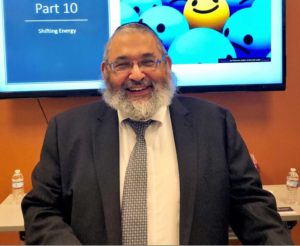 Imagine a world in which brick walls could be penetrated.

There are no dead ends; no one is beyond help. Anyone can learn, grow, and achieve.

In this world, people who struggle can harness their strengths to solve their problems, and rebbe’im and teachers can reach every child, no matter how distant or difficult the child seems.

In keeping with his motto “Leave no student behind,” Rabbi Shalom Storch spent years changing the lives of his talmidim through his unique teaching model. Today, he uses this philosophy to reach adults in leadership capacities, helping them mine for the diamonds buried deep inside.

Learning from the masters

Rabbi Storch reflects on the impactful teachers, beginning with his parents, who molded his passion for helping others.

His father was instrumental in establishing a Pirchei Agudah minyan in Flatbush, where he focused on making davening enjoyable for the children. “In every situation, my father  always looked forward to working with youth and doing something for them,” Rabbi Storch notes.

Looking back at the chinuch he received from his own rebbe’im, he draws many of his teaching philosophies from his teachers at MTJ, Mir Yeshiva of Brooklyn, and Yeshiva Gedolah of St. Louis. One rebbi in particular, Rabbi Mendel Kaplan, encouraged his students to think on their own. He often surrendered the floor to his talmidim, asking what they thought of the gemara he had presented and stepping to the side as lively discussions ensued. Later on, this concept became the basis of Rabbi Storch’s Quality Transformative Learning system.

Another mechanech who had a big impact on Rabbi Storch was Rabbi Yitzchak Kleiman, rosh yeshivah of Yeshiva Gedolah of St. Louis. He once had to expel a student who was caught stealing. As he escorted the boy out of the school, Rabbi Kleiman told him, “Remember: you are not a ganav, you just did something silly.” Five years later, this student called the rosh yeshivah with an update: he was a successful businessman who learned for three hours each day. The story taught Rabbi Storch to be a staunch believer in his students, never losing faith in their innate goodness and abilities. “You have to believe in your talmidim’s potential,” he emphasizes.

Building the next generation

After graduating from Yeshiva of St. Louis, Rabbi Storch learned in BMG for two years. In 1980, he celebrated his marriage to Dina Kaluszyner, a gifted composer who has greatly influenced the Jewish world of music.

When it came time for Rabbi Storch to start making a living, he knew that his calling was chinuch. The young couple returned to St. Louis, where Rabbi Storch served as a maggid shiur for six years. In 1990, he continued his teaching career in Cleveland as an eighth-grade rebbi and then as the menahel of the yeshivah ketanah in Hebrew Academy of Cleveland.

Rabbi Storch was part of the original group that attended the Senior Leadership Fellowship program provided by Torah Umesorah. In fact, he later became a mentor in the program. The group studied under experienced mechanchim for three years and visited Eretz Yisrael to meet with many gedolim and top mechanchim.

A decade later, Rabbi Storch moved to Lakewood and founded Yeshivas Nesivos Ohr, where he infused the staff and students with his chinuch values until its closing in 2012.

To step into a Nesivos Ohr classroom was to be enveloped in learning. Classes there were not delivered dryly, in lecture-style format; learning was absorbed through all modalities. The visual, auditory, and kinesthetic senses were engaged in each lesson. With the senses invited to experience each lesson, the messages stuck with their learners, making a mark that remained long after tests were taken and assignments were fulfilled.

With the application of a variety of learning modalities, students practiced and applied what they learned. This method also enabled students to become independent learners.

The Nesivos Ohr motto was one of happiness and fulfillment. The tagline, “Learn geshmak, feel great,” was written on stationary and all over the school building to instill an upbeat atmosphere and encourage students to reach higher.

As the leader of the yeshivah, Rabbi Storch emphasized the importance of bringing out the best in each boy. He trained the rebbe’im to include all students at all times, not just the ones who raised their hands. “The four treife words at Nesivos Ohr were, ‘Who can tell me?’ Those words are exclusive by nature,” he explains. Instead, teachers addressed the entire class with questions, giving every student a chance to share his thoughts. Other methods include multiple-choice challenges and thumbs-up, thumbs-down responses.

As the creator of a unique method of reaching students of all kinds, which he presented to his staff through workshops, Rabbi Storch is passionate about bringing lessons home to each and every child. “Lecturing on a subject without ensuring that the students have absorbed it means teaching is happening, not learning,” Rabbi Storch says. “Quality Transformative Teaching—the method I developed—transmits material in a way that it becomes a part of the students; it transforms them. Just as a lesson in middos is only learned when it’s applied, any new skill should be similarly absorbed. When a student learns to dissect a Rashi, the new ability should become a part of him. A new word should join the talmid’s vocabulary so he is transformed; he isn’t the same person he was before learning it.”

Over time, Rabbi Storch realized that one of the most useful tools that a rebbi or menahel can have is the ability to coach. With that, he decided it was time to go back to school. He took courses at many famed coaching schools, including Refuah Institute and the Institute of Professional Excellence in Coaching (IPEC), later attaining further certification from the International Coach Federation.

“I came to realize how closely related coaching is to Quality Transformative Learning. Both are rooted in the idea that every person is creative, resourceful, and whole, and every person knows themselves best. In both systems, the teacher or coach assumes the role of a careful listener, helping the client unlock inner barriers and access the wisdom and ability within. The coach inspires their client to maximize their professional and personal potential by helping them chip away at their limiting beliefs and inner critic.”

Currently, Rabbi Storch serves as a coach for the Senior Leadership Fellowship for Yeshiva and Day School Principals. He coaches menahalim and businessmen individually both in his Lakewood office and via Zoom.

In addition, he provides an online training course, The Center for Coaching and Leadership Training, which is unique in that it provides real leadership tools as well as a comfortable, frum environment for both men and women, in separate groups.

“I run the classes alongside my associate, the menahel of Yeshiva Elementary School of Milwaukee, Rabbi Dovid Kossowsky. The slogan is, ‘Lead consciously,’ a principle that can be applied to parents, principals, CEOs, and anyone else in a leadership capacity. One of my favorite aspects of the coach training is the fact that training one leader impacts hundreds—and sometimes thousands—of individuals.”

“Every mechanech must constantly develop and improve their tactics to retain the passion and drive necessary for teaching. I have three portraits hanging in my office: Rav Shmuel Berenbaum’s, Rav Yisroel Belsky’s, and Rav Moshe Feinstein’s. When I feel like I’m wasting time, Rav Shmuel’s image reminds me to use my days wisely. When a complicated issue leaves me feeling stuck, the picture of Rav Belsky, a broad-minded visionary with vast knowledge, inspires me to find a solution. The image of Rav Moshe Feinstein imbues in me an appreciation for the great potential of human beings. When we recognize the potential inside every student and child, we uplift them and enable them to soar.”

Advice from the expert

As the school year winds down, Rabbi Storch imparts advice that is useful to both parents and mechanchim.

The five c’s of coaching

“When I sit down with a new client, the first thing we do is discuss their goals. This step—which I call connecting—is the first of a five-part coaching model that I developed. The second step is contracting—figuring out the goals of the client together with them. Next is clarifying—helping the client understand the importance of their goals. Afterward is creating—carving out a clear, attainable path with the client to reach their goals. The last step is committing—ascertaining that the client is going to stick to their plan to attain their goals.”

For appointments or to join the upcoming certified coach training course, contact the Center for Coaching and Leadership Training at 732-534-5962 or shalom@cfcalt.com. For more information about the course, visit cfcalt.com.