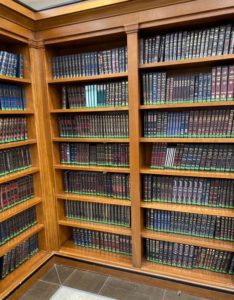 Reuven pushes open the frosted French doors to his study and a leathery scent wafts through the air. It’s been a long day at work. A halachic inquiry has been concerning him on and off throughout the day, and he is hoping to clarify it in short order. The spines of hundreds of ramrod-straight sefarim are displayed before him in their brown and gold hues. There are hundreds of them in his humble yet noteworthy library. He scans the rows and rows of organized shelves. He only needs one specific sefer that will put his mind at ease.

He pauses to consult with the embossed, labeled shelves. Third bookcase, fourth shelf to the right. In the Halachah section. He whips the sefer off the shelf, thumbs it open to the page he needs, and smiles. He lifts his eyes in silent gratitude and whispers, “Eli Hofstatter, thank you.”

Mr. Eli Hofstatter stands at the helm of The Seforim Organizers, a popular enterprise that has been transforming cluttered shelves into neatly organized and labeled libraries for over a decade now. His jobs are recognizable by their signature stamp of professionalism, accuracy, and organization. He’s done hundreds of jobs in the Tristate area and beyond, including dozens in Lakewood. Eli services shuls of all sizes as well as private homes, including moving jobs. He organizes, shelves, sifts through, and catalogs every sefer at the site, creating a masterpiece of a library for any shul or home.

It is well-known that Rav Chaim Kanievsky zt”l was careful to place every sefer in its proper location after using it, thus eliminating wasted time when looking for a sefer when it’s needed. Numerous local private homes and shuls sport expansive libraries, and without any sort of seder to the collection, searching for the one sefer that one needs at the moment can be a frustrating experience. Eli’s system works—and it makes all the difference.

How did he come to be the premier name in this one-of-a-kind field?

“Eleven years ago, as a bachur, I was approached by the president of our shul and asked to take on the job to organize the sefarim in the shul during bein hazmanim,” Eli relates. “Frankly, I felt that I had better things to do in my spare time and wasn’t interested.”

The president kept pushing and offering more money until Eli finally agreed and set himself up with some other bachurim. It took a few weeks to organize the entire shul, but they got the job done.

One year later, Eli’s rebbi asked himwhat his plans were for bein hazmanin. At the time, he didn’t have any plans in place. His rebbi urged him, “Why don’t you continue the sefarim organizing? Take your talent and experience and go do it elsewhere.”

And that is exactly what he did.

“I’ve always been a meticulous kind of person; I was born like that. I like to be organized, and I live my life that way. My room was never messy even as a kid, so I guess this comes naturally,” Eli explains.

Word of his talent quickly spread, and it didn’t take long for the jobs to come pouring in.

Beyond a bein hazmanim activity

As the business grew, Eli mobilized himself and his staff to be able to knock out any job in one to two days, specifically over a Motza’ei Shabbos and Sunday.

He recently worked his magic at Kol Aryeh in Lakewood. The job was unique in many ways. Located on Hope Chapel Road, the shul is a hub of constant activity and one of Lakewood’s longtime minyan factories. With 400 shelves of sefarim in total disarray, this was a huge task, and before beginning, Eli and his crew strategized how to complete the job in the most efficient way.

Eli stayed at the home of his brother in Coventry Square for Shabbos in order to be nearby. That week, Shabbos was over at 7:30 p.m. The job commenced at 9:30 with six bachurim as helpers (more on that later). For four to five hours, the crew worked nonstop, sifting, organizing, separating sheimos,and categorizing. The first of the crew went home at 2 a.m. and the others, some two hours later. Eli himself stayed in the shul, working until six in the morning. He then joined a Shacharis minyan in the shul and went back to his brother for some shut-eye.

At noon, Eli was back on-site together with a crew that had come to assist him in various shifts throughout the day.

By that evening, the entire Kol Aryeh was neat and organized; every sefer was labeled and had an entirely new look. It had been a mammoth task, and it was completed in less than 24 hours.

Every Jewish home has sefarim, usually to the tune of 600-plus. If you think about it, a typical frum home has at least four sefarim bookcases. If each bookcase has six shelves, with 25 sefarim on a shelf, that brings you to 600 sefarim right there, for starters. Shuls, especially large ones, can easily have 10 times that amount, at least. Eli notes that Lakewood shuls stand out with their impressive libraries, both in the quality and the breadth of the collections.

Often, a shul will be gifted or donated many sefarim, but shuls usually don’t have a large budget or donor base for an organizing job.

“It’s unfortunate,” Eli explains, “because what use are the many donated sefarim if people can’t find the sefer they need? My jobs are reasonably priced and usually more affordable than you would think.”

Numerous components go into each job and correspondingly, the price: Are the shelves dusty and old? Will they need to be adjusted and fixed? Are the sefarim in somewhat of an order, or is there total chaos? Are the shelves low down or higher up, requiring the use of a ladder?

In all cases, the transformative results are more than worth the price.

Many local shuls have benefited from The Seforim Organizer’s talent, including Bais Horaah of Lakewood on Fourth and Madison, Rabbi Shachar’s shul on East End, Kol Aryeh, Lev Avos on Iris Court, Ateres Yeshaya, and the Neustadt shul on County Line. Sometimes the rav will approach Eli; other times, it can be a member of the board or any member of the shul. When Eli is wrapping up the job, people usually approach him and say, “Can you come organize the sefarim in a different shul that I daven in, or even my house? I think we can use you there…”

A person’s sefarim tell a story about their owner.

Eli has seen it all when it comes to private libraries. “Lakewood families have unbelievable collections of sefarim,” he says, “and there is so much that you can learn about an individual from his sefarim.” When he sees very well-worn-out sefarim with dog-eared pages and sticky notes all over the place, he knows that the client is a true talmid chacham who uses his every spare moment to learn. Eli can also tell which yeshivos the person went to, and even his derech halimud.

Does Eli come across rare manuscripts or expensive items?

“A lot of the private libraries are basic. It used to be that in old shuls, you could find a rare copy of something, but by now everything is so out in the open and known.”

Eli often comes across lost items in sefarim, like an envelope with money or a driver’s license. He likes to remind everyone to shake out their sefarim well every year before Pesach!

Eli has collaborated with local professional packers and organizers to complete the sefarim-organizing process during a move. Sefarim are a huge part of moving, and it’s important to get it done right and settle into the new home with an organized system.

How does he organize all those sefarim?

Perhaps the most important part of the entire process is the knowledge that Eli has acquired about sefarim. By now, he knows exactly which sefarim belong in which category, which significantly speeds up the organizing process.

“At this point, the database in my head is really built up, and I rarely have to open a sefer to check which category it fits into,” Eli shares.

Before the job starts, Eli asks pertinent questions to determine the needs of the users: Is there a daf yomi shiur that will require Gemaras to be accessible? Where is the ezras nashim? Where do they want the siddurim and Chumashim to be placed? Is the clientele balebatim who need divrei Torah on Chumash to be easily accessible, or is it a Halachah kollel which needs to have more practical sefarim on hand?

Generally, the top shelves are for reference sefarim and sefarim that people hardly use. The bottom shelves are also for less commonly needed sefarim, such as Kovetz Mefarshim for bachurim—at their age, even if they do need it, they can still bend down to get a sefer!

The Seforim Organizers also offers cataloging services, in which a complete list of all the sefarim is compiled on a formatted spreadsheet. This allows members of the shul or home to search digitally or manually and check to see if they have a specific sefer.

Eli aims for an everlasting effect and strongly encourages his clients to incorporate the labeling step in the job. Every sefer is color-coded and labeled so that its location can be tracked and found when needed. Often, though, in an effort to save money, clients forgo the labeling process, promising that the neighborhood bachurim or rav’s grandchildren will complete the job.

“It never happens,” Eli asserts. “Two years later, the client calls me back to come and complete the labeling process, which should have been done right away.”

In Lakewood, The Sefarim Organizers has contracted with local bookcase companies, bookbinders, and sheimos services. In particular, Aharon Taplin of Capitol Seforim and Dovid Lousky of S&D Woodworking have been dedicated partners. YP Bookbinding, too, is an integral part of the process. It goes without saying that getting every sefer bound is the way to go.

“Few publishers are very good about quality binding, so most sefarim cannot be relied upon to last. I suggest binding every siddur and Chumash, considering the constant daily use.” If a siddur costs $12, Eli maintains, it’s worthwhile to invest another six dollars for binding, which can last you a good 10 years, as opposed to purchasing a new one two years later.

A gift that keeps on giving

Years after his initial organizing job as a bachur, Eli relates that the satisfaction inherent in making sefarim accessible and easy to find in an esthetic way is more than worth the hard work it entails. What began as a project to help a desperate president has morphed into a service that so many in our community have benefited from.