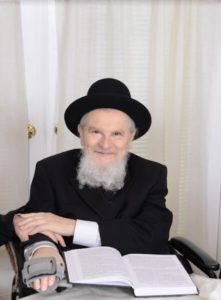 The Quiet Giant Who Inspired Thousands with Love and Exactitude

Side by side, rebbi and talmid paced the front of the beis midrash, pausing every now and then. The bachur, Mordechai Respler, was discussing with his rosh yeshivah, Rav Yitzchok Feigelstock, a difficulty in the words of Rav Shlomo Heiman, which the latter had said over in shiur. Part of the siman in the sefer was missing and they were attempting to fill in the blanks. After a few tense moments, the Rosh Yeshivah turned to his beloved talmid and said solemnly, “Such a question needs to be addressed by a talmid of Rav Shlomo. I will be meeting Rav Elya Svei at a chasunah tonight, and I will ask him.”

Today, some 40 years later, this short interaction enables that same bachur, now a rosh yeshivah himself, to define the legacy of the towering Torah giant and master mechanech that Klal Yisrael lost this past week. Rav Respler sees this incident as a window into the lengths a rebbi must be prepared to go for his talmid, and a glimpse into the seriousness that the Rosh Yeshivah attached to the words of gedolei Torah of the previous dor.

“Never mind that the Rosh Yeshivah, in his brilliance and yegiah, could’ve easily given a quick resolution to explain the rest of Rav Shlomo’s words; he had learned the sugya countless times, and undoubtedly contemplated the issue himself,” Rav Respler shares with me the day after the levayah of his legendary rebbi. “He was showing me that when one is learning Torah, nothing is to be taken lightly.”

This was indeed something that the Rosh Yeshivah strove to instill in his talmidim. Reticent by nature, Rav Yitzchok never spoke of himself. But his actions spoke louder than anything else. The talmidim saw the tremendous yegiah that he invested into each shiur. They saw how one is to take apart a sugya; each word of Rashi analyzed, each nuance of the Rishonim dissected, and then, only then, can one build a yesod that pulls the sugya together with a clear explanation that emanated from those sacred words.

“The Rosh Yeshivah used to say that saying a ‘vort’ without basing it on a proper iyun in the words of the Rishonim is pointless,” Rav Respler says. “In general, his whole mannerism was steeped in ehrentskeit. Nothing was done just to be yotzei. When he spoke, we felt that each word was measured.”

Once, while suffering from severe illness, he began learning mishnayos with his son-in-law, Rav Moshe Gold. At one point he was trying to understand the machlokes of the Tana’im, but due to his weak state, he was unable to do so. “We have to stop here,” he said painfully. When asked why they couldn’t continue learning on a more basic level, Rav Yitzchok replied forcefully, “Torah sheba’al peh lernt men nisht pashut!”

Rav Respler recalls the Erev Rosh Hashanah shmuess that the Rosh Yeshivah would give in yeshivah. “The shmuess took precisely an hour and a half. It was the exact same shmuess every year: he would tell us what Rosh Hashanah was about and what our avodah should look like—nothing more, nothing less.”

Rav Respler once went to visit Rav Yitzchok during the summer bein hazmanim. He was sitting at the table, engrossed in thought. When prompted, Rav Yitzchok explained that he was preparing the Erev Rosh Hashanah shmuess, which was more than a month away. The same exact shmuess that he had been giving for decades!

“He looked at me, understood my unasked question, and said, ‘Vus meinst du, I’ll give a shmuess just like that?’ He wanted to live it, to internalize it all over again, before he could give it over to the bachurim.

“The ehrentskeit applied to every aspect of his avodas Hashem. Coming late to a shiur or to a tefillah was out of the question. He was always in his seat a few moments before davening began. In yeshivah, davening starts exactly on time. The only time I can remember him coming late to shiur was when he was speaking to Maran Rav Shach, and he simply could not put down the phone.”

Rav Chaim Yehoshua Hoberman, Rosh Yeshivas Long Beach, mentioned in his hesped in Bais Medrash Govoha that somehow, Rav Yitzchok balanced the exactitude in time with serenity; he never needed to rush to come on time—it was all calibrated with precision beforehand.

Only for the sake of the talmidim

Rav Yitzchok’s approach to the talmidim was complete and total devotion; primarily to their shteiging in Torah and mussar, but also to their physical and emotional needs. The serious demeanor and high expectations he had of them belied the endless amount of love that he felt for them. Although the talmidim didn’t see it openly, they felt the love deeply.

It was this unspoken love that enabled this quiet man with a broken English to relate to the American bachur of the 70s and 80s. It enabled him to lift them up and turn them into true bnei Torah. Even when giving rebuke, he knew the exact measure each talmid could use to grow. For those whom he knew could handle it, the Rosh Yeshivah would reprimand sharply, demanding change. For others the Rosh Yeshivah took a softer approach.

One talmid recalled how he was presented with a lucrative business opportunity that would have placed him in a questionable tznius position. “The Rosh Yeshivah didn’t tell me no. He simply reminded me of how I used to sit and learn the words of the Rashba while in yeshivah. ‘Does it pas for someone like you?’ he asked me softly. I left with a clear answer, feeling a lot richer than the money I could have made on that business venture.”

When he heard about the hatzlachah of a talmid, the Rosh Yeshivah would take immense fatherly pleasure. One unique practice that Rav Yitzchok had was mentally reviewing each talmid in his shiur, every single day, to see what his needs were and to ensure those needs were being met.

Concealed in the demanding chinuch he imparted in the earlier years as rosh yeshivah, that love came pouring out after the Rosh Yeshivah suffered a debilitating stroke in 2003. No longer able to guide and communicate in his regular manner, Rav Yitzchok took on a new mehalech. He would embrace each talmid warmly, allowing the rivers of love that lay beneath to bubble to the surface with force. Upon meeting a talmid who came to visit, the ailing Rosh Yeshivah’s face would light up with excitement and he would immediately inquire about the visitor’s life and family.

Unlike other yeshivos, the machzor of masechtos in Long Beach was only a three-year cycle. This was because the Rosh Yeshivah felt that these few masechtos were the ones through which he could best give over the exact tools a bachur needed to become a lamdan and shteig. “This, despite having chiddushei Torah on so many more masechtos,” Rav Respler says. “In the later years, notebooks were found with his brilliant chiddushim on most of Shas. We never heard from him about his ge’onus, it was all hidden. But giving shiur was an achrayus that he took extremely seriously.

“The first few years he didn’t go to family simchos at all; he was too consumed with preparing the shiurim. Let’s not forget that prior to opening the yeshivah, he learned in Lakewood for twenty-two years. He didn’t need time to come up with the chiddushim; he was using every waking moment to figure out precisely how to give over to the bachurim in the way that would give them the most they can get.”

The esteem in which Rav Aharon Kotler held Rav Yitzchok Feigelstock was beyond comprehension. “Ehr iz a peleh yoetz (he is a wondrous advisor)!” Rav Aharon would say about the young Rav Yitzchok. The gadol hador had such trust in his talmid that he would ask his opinion on anything from the content of a drashah to urgent klal decisions. Rav Aharon once received a letter from the Brisker Rav, but delayed reading it until Rav Yitzchok was there.

“I was once visiting Rav Feigelstock when he was recovering from surgery, and I succeeded in getting him to talk about his relationship with Rav Aharon. (Rav Yitzchok didn’t just schmooze without any purpose; every word he uttered was for a goal.) In his weakened state, he looked at me deeply and said, ‘Ich veis nisht vus er hut gezen in mir (I don’t know what Rav Aharon saw in me)…’  It was amazing—Rav Yitzchok was a bachur, and the gadol hador would ask him for help in decision-making!” Rav Respler concludes.

In recent years, the Rosh Yeshivah suffered tremendously. He no longer gave shiurim and the number of shmuessin he gave was severely limited, but he never stopped teaching. Physically weak and in pain, unable to maintain his life’s goal of establishing talmidim, Rav Yitzchok transcended above his own situation, instead focusing on that of the others around him. He was no longer teaching lessons in Gemara, but the life lessons of how to deal with adversity, pain and suffering are just as important as everything else he ever sought to impart.