Let’s Bring Him In 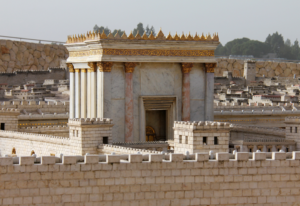 Brooklyn born and bred, living and learning in Lakewood, R’ Pinchos Doppelt sounds like your regular, run-of-the-mill kollel yungerman. But R’ Pinchos is far from regular. He’s a man on a mission, and he is changing Klal Yisrael, one phone call at a time.

R’ Pinchos starts our conversation by exclaiming over the state of world affairs. Gas prices are doubling; Russia, Ukraine, and China are in crisis; and the world seems to be headed for disaster. It’s a crazy world we live in, and R’ Pinchos has made it his mission to wake Klal Yisrael up to the messages Hashem is sending. Hashem is ready to bring Mashiach, claims R’ Pinchos, and our job is to be ready to greet him.

He notes that Rav Chaim Kanievsky keeps saying, “Mashiach is at the door; we must bring him in.” That’s the tenet R’ Pinchos lives by, and now he is sharing the wealth, raising awareness of this vital yet misunderstood topic.

R’ Pinchos attributes much of his early inspiration about the topic to his grandfather R’ Shmuel Gellis zt”l, who was constantly preparing himself to greet Mashiach and was a “real” Yid in every sense of the word. He remembers R’ Yisroel Chaim Freidman zt”l’s tears on Tishah B’Av, which awakened something deep within him. In addition, Rav Raphael Paschkusz, R’ Pinchos’s ninth-grade rebbi, was a tremendous role model during his formative years, teaching him through example the proper way to react to challenges and how to recognize Hashem’s Hand in everything in life and attribute every event to our Creator.

Today, R’ Pinchos learns during the day and performs on the side as a one-man-band. In his line of work, like in everything else that he does, R’ Pinchos lives by the motto “Let’s be real.” Being real means being honest with oneself about their true hashkafos, which is why he only plays songs with a real Yiddishe ta’am, keeping in tune with who we really are.

How and when did R’ Pinchos “get into” the inyan of Mashiach?

“It’s a very misunderstood topic,” he shares. “People are confused. They get mixed messages, which sometimes causes the whole topic to be pushed under the rug. People are afraid to hope because there have been so many occasions throughout history when we were so sure that the Geulah was imminent, only to be disappointed. Other times, we forget that we are supposed to be in Yerushalayim, that America is not our true home.”

But the catalyst that spurred him to take action for the klal was Covid-19.

“I looked around at the world going crazy and at the people who were scared and confused. We needed direction. How should we understand what was going on? What did Hashem want from us? What did it all mean?”

He saw a need and threw himself into the task, experiencing lots of siyata d’Shmaya along the way. To date, R’ Pinchos has written and published around a dozen kuntreisim on the subject of tzipisa l’yeshuah as part of a series titled Let’s Be Real. The pamphlets are distributed worldwide, and the feedback has been unbelievable, says R’ Pinchos.

“People have told me that it changed their lives. Now they have a direction—a true Torah understanding of current events and a feeling of peace and purpose.”

R’ Pinchos consults many rabbanim as he writes, in addition to hiring editors to review the manuscripts, to ensure that his work is as technically and hashkafically sound as possible. Gedolim such as Rav Shlomo Frankel of Flatbush, Rav Dovid Schustal, and Rav Yeruchem Olshin have given haskamos to his work, allowing the kuntreisim to earn the trust of the public so that his words, written from the heart, can penetrate.

Recently, R’ Pinchos has turned his attention to a different, major undertaking—his Growing Every Day hotline. He created the hotline for the purpose of enabling Yidden the world over to call in and hear words of inspiration and chizuk, to gain clarity and direction in their avodas Hashem during these turbulent times and be encouraged to prepare for Mashiach.

“There is so much awareness today about emunah and bitachon,” R’ Pinchos notes. “Now all we need to do is take the next step and connect it to Mashiach. Yes, Hashem loves us, and He is in control of everything. Now that we recognize that, don’t we want to come home to Him? To serve Him the way He intended?”

The hotline includes shiurim by Rav Shlomo Baruch Alon on the halachos of tumah and taharah, a topic that is not widely studied today because sadly, it is not relevant without the Beis Hamikdash. But R’ Pinchos feels that it is important to awaken the public to vital topics they were previously unaware of.

The main feature of the hotline is the powerful daily shiurim given by Rav Moshe Sorotzkin, son of Rav Yitzchok Sorotzkin and son-in-law of the mashgiach Rav Matisyahu Salomon and author of The End Illuminated (Keitz Hayamim and Keitz Hageulah). His eye-opening drashos bring awareness of the imminent arrival of Mashiach and help us to ready ourselves.

R’ Pinchos first connected with Rav Sorotzkin last summer when, with the blessings of the Roshei Yeshivah, a group of about 100 yungeleit from BMG got together and formed a chaburah focused on being metzapeh l’geulah. They said Tikkun Chatzos and heard daily shiurim from gedolei Torah, including Rav Moshe Sorotzkin.

R’ Pinchos is constantly working to update the hotline and bring it to new levels. In less than two months, it has gained a following of approximately 600 callers a day, and the number keeps growing.

Plans for the future

It’s hard to ask a metzapeh l’geulah what their plans are for the future. They sincerely hope and believe that very soon they will be in Yerushalayim, on their way up to the Beis HaMikdash to bring a Korban Todah, thanking Hashem for the miraculous Geulah.

As far as future plans to inspire Klal Yisrael, though, R’ Pinchos dreams of making an asifah, similar to the technology asifah in Citi Field, to raise awareness about readiness for Mashiach.

“People will feel calmer once they realize the reason behind everything going on around them,” he says. “They’ll be more energized, with a purpose and a mission in their avodas Hashem.”

But inspiration is not enough. “It wears off,” R’ Pinchos claims. “After the initial asifah, I want to make a huge asifah for rabbanim and rebbe’im to inspire and educate them so that they can go on and continue to inspire their classes and kehillos.”

With hearts full of anticipation

Chazal say that Mashiach could come today, right now, if we are waiting for his malchus and do teshuvah.

In the past two years, the world was flooded with messages. However, many people are not familiar with the words of Chazal, some of which are well-known while others are not. Rav Moshe Sorotzkin’s shiurim imbue its listeners with a realization that we can jump onto the boat and take to heart the messages Hashem has been sending us. They provide clarity about current events like the fact that we might be on the brink of another World War, chas v’shalom, and the out-of-control inflation that Chazal say will precede the final geulah, allowing listeners to see world events through a Torah lens.

Scientists have recently discovered that the Earth pulsates regularly. How regularly? Once every 26 seconds. Twenty-six is the gematria of Hashem’s Name, the Shem Havayah. Chazal say that in the time of Mashiach, there will be a new havayah—the world will be born anew, into a totally different existence.

But it’s up to us. That’s the message R’ Pinchos is working so tirelessly to spread.

If you would like to have a deeper appreciation of current events as well as daily inspiration, you can tune in to Rav Moshe Sorotzkin’s shiurim at 848-777-GROW (4769). Let’s be zocheh to greet Mashiach with hearts full of anticipation because we will have prepared as much as we can, and we will be worthy of a geulah b’rachamim, amen.