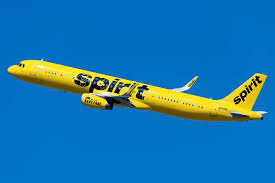 An orthodox Jewish family from Toms River ordered off a Spirit Airlines flight for not masking a baby and a special-needs child is asking the airline to apologize. Spirit representatives are claiming that adults in the party violated the mask rules, despite clear video evidence showing flight attendants deplaning the family because of the baby.

Ari and Avital Eisenberg were waiting for takeoff last Monday on board Flight 138 with their children — Rikki, 2, and Daniel, 7, who has special needs — after spending Pesach in Florida. The couple is also expecting another child in about two months.

Video capture of the episode shared widely on social media shows the Eisenbergs wearing masks on board the plane, while Rikki eats a yogurt on her mother’s lap. A flight attendant approaches and orders the couple off the plane.

“What did we do?” Avital asks.

“I told you, noncompliance — you’ll have to get off,” the flight attendant says. “I didn’t want to do this.”

“OK, no problem. Tell me what we did,” Ari Eisenberg responds.

“Noncompliance with the masks.”

“She’s not wearing a mask,” the flight attendant says, pointing to the toddler.

After some arguing, the flight attendant threatens to call the police and leaves. All passengers on board are subsequently forced off the plane, and allowed to reboard and continue onward sometime later. Police at the airport apologized to the Eisenbergs after they were led off the plane.

Someone on board tweeted a video of the incident in real time to Jewish news outlets, which picked up the story and publicized it on social media. Major news outlets carried the story as well, and in the ensuing days, the Eisenbergs granted interviews with Fox News and many other networks.

Spirit Airlines responded with contradictory and deleted tweets, ultimately claiming the adults violated the federal mask order, but that their violation wasn’t captured on video.

In some of those interviews, the family reported that they suffered severe traumatic-stress reactions to the embarrassing and painful spectacle. Mrs. Eisenberg reported fearing early labor on the plane as a result of the abuse and humiliation of the flight attendants. Ari later lost his voice, also in reaction to the stress, and both parents reported physical symptoms of illness. Such symptoms conform with classic PTSD reactions.

While on the plane, the Eisenbergs said, they were approached two previous times by flight attendants, complaining about the nonmasking of their older son, Daniel, who has specialized needs and is exempt from masks by CDC guidelines and airline policy. Mrs. Eisenberg noted that the seven-year-old was prone to seizures exacerbated by masks, and that with his face covered he was likely to injure himself, displaying stress symptoms and self-biting. The couple said they rarely fly because of Daniel’s condition, as he requires music to remain calm. Flight crew also ordered the family to do away with the music, although nearby passengers were playing music more loudly and none complained about Daniel’s.

The family has been represented in the past by special education attorney Michael Inzelbuch, and retained him shortly after arriving home. The lawyer held a press conference in which he demanded an apology from the airline, noting that this was the third incident of mask-related harassment of Jewish passengers. “We’re not asking for boycotts. We’re not asking for marches,” Inzelbuch said. “We are asking at this point for two words: ‘I’m sorry.’” He did note that the family was considering litigation in the event that an apology was not forthcoming by Wednesday. “Right now we want a commitment that this will not happen to any family, any special needs child,” he added.

Spirit Airlines issued a statement saying the information circulating about the incident was false, and that it wanted to open a dialogue with the family. “The flight was delayed due to adults who did not comply with the federal mask requirement,” the statement said. “We allowed the guests to continue on the flight to their destination after assurances of compliance.”

The company initially deleted a Twitter post saying the family was ordered to deplane because it was the toddler’s parents who were not wearing masks. “We also understand that we are looking at this through different lenses, which is why we would like to open up a direct dialogue with the family,” the company said in a statement. But Inzelbuch said he has reached out to the airline multiple times and has not received any interest in conversation.