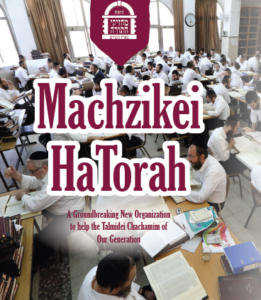 A young girl goes to the grocery to purchase items for Pesach.

She loads all the items in her cart and proceeds to the checkout counter.

However, when she is ready to check out, the store owner apologetically explains that because her family has reached its credit limit, he is no longer able to extend any credit. Dejected and ashamed, the girl leaves the store empty-handed and goes home to inform her parents of her humiliating experience.

Unfortunately, this scenario is not uncommon in Eretz Yisrael.

Imagine that it were your daughter. Or your wife. Or you.

But the pain and humiliation encompass so much more than Pesach shopping. Many children in Eretz Yisrael walk around with ripped or patched clothing and shoes that are too small. They may not eat a nourishing breakfast, they may not have adequate snacks or lunch in school, and many go to bed hungry. How can such children learn Torah properly?

With much syata d’Shmaya, all that has been changing.

Machzikei HaTorah has seized the opportunity to alleviate the financial stress of many poverty-stricken talmidei chachamim.

And they turn to you to offer you the privilege of helping these chashuve mishpachos.

They have always been there for us. These are the Torah scholars we turn to with our halachic she’eilos, with our doubts, with our hashkafah questions, for psak, for encouragement, for advice.

With dignity and discretion, Machzikei has identified many such families and given them the necessary funds to enhance their simchas Yom Tov.

While many people don’t even think before purchasing these basics, these chashuve families often couldn’t even entertain the notion of buying these items. There was no money.

Unfortunately, this is not a new phenomenon.

The Shvus Yaakov, Rav Yaakov Reischer, was delivering his legendary Shabbos Hagadol drashah. The topic was the minimum shiur of achilas matzah.

People had come from all over to hear the talmid chacham’s intricately woven tapestry of Torah, and even the greatest Torah scholars of the region were in awe of the brilliance and depth of the Shvus Yaakov’s speech. After two hours, the Shvus Yaakov concluded his talk. By the time the Rav reached the door of the beis medrash on his way out, nearly everyone had said something to him—a comment, a question, an added point, a compliment about his riveting speech.

But there was one individual who had yet to be heard. A haggard-looking man approached the Rav with his own kashe on the shiur: “Rebbi, what difference does it make what the shiur of achilas matzah is if I don’t have any food or matzah for my family for Pesach?”

The Shvus Yaakov was taken aback. He looked at the pauper who stood before him; the man was crying. Immediately, he retreated to the podium where he had delivered the drashah. As he stepped onto the stage in front of the aron kodesh, the crowd hushed.

“My entire drashah is upgrefrekt (proven wrong),” the Shvus Yaakov announced. “The new shiur for achilas matzah is to ensure that every family has enough food and matzah to eat for Pesach!”

Machzikei has changed the script, ensuring that our public servants have enough food for Yom Tov.

Two thousand(!) dayanim, rabbanim, roshei yeshivah, roshei kollel, roshei chaburah, and other chashuvim who have dedicated their lives to the service of the klal and Hakadosh Baruch Hu have benefited from kind Yidden’s generosity and benevolence. Seeing the necessity, Rav Moshe Sternbuch, ra’avad of the Eidah HaChareidis in Yerushalayim, and Rav Nosson Kupschitz, dayan of the Eidah HaChareidis in Yerushalayim and rav of Nachalah U’Menuchah in Beit Shemesh, have gotten involved. In addition, Rav Yitzchak Sorotzkin and Rav Yerucham Olshin gave glowing haskamos and approbations to the new venture.

Many of the talmidei chachamim helped by Machzikei are household names, though many others have managed to stay out of the limelight. Their relative obscurity makes our support even more essential.

Machzikei has virtually no overhead, so the money goes directly to the recipients. What’s more, the recipients are honest and upright and refuse to take an extra penny, ensuring that donations are used optimally.

Case in point:Machzikei was given the name of a rosh chaburah who needed help with his Yom Tov needs. After he received a donation, the rosh chaburah called up Machzikei with a question: “Was the money donated specifically for me? You see, I have relatives who cover my day-to-day living expenses. So, even though I could use the money, I don’t want to take it away from someone who has no help at all.”

Another one: A few days after Sukkos, one of the askanim involved in Machzikei was paid a visit by a talmid chacham on the organization’s list. After thanking the askan for the Yom Tov distribution, the man took out 700 NIS and told the askan, “The funds I received were for tzorchei Yom Tov, so I am returning the money I didn’t end up using.”

And: Before Yom Tov, representatives of Machzikei approached a prestigious posek and offered him money for Yom Tov. He refused it. “I have someone who is trying to help me. (Editor’s note: He is still in major debt, even after the help.) Give the money to someone who doesn’t receive any assistance at all.”

One more: A rosh kollel was asked if he would take money for Yom Tov. The answer was no. “I live month to month. I have what I need for this month, so I’m not going to take at this point.”

What a zechus to assist such chashuve individuals!

Who is supporting whom?

In truth, it appears that machzikim (supporters) are supporting the talmidei chachamim. But the reality is vice versa.

A brilliant young bachur, Hillel Lichtenstein, who would one day grow up to become Rav Hillel of Kolmay, was learning in Pressburg. At that time, young men would eat their meals at the homes of the ba’alei batim in town, who gave of their food and their time to prepare meals for them.

Though Hillel’s ba’al habayis was a fine individual, he was extremely rigid and particular about time. When lunch was served at 2 p.m., he expected his guest to be there at 2. But on occasion, Hillel would get lost in his learning and lose track of time. His host, although displeased, never said anything, but it took great self-control on his part.

One day, Hillel was so engrossed in a Rashba that he only realized what time it was when he looked at the clock at 4:30 in the afternoon. He felt terrible and immediately rushed to the home of his hosts to apologize for his tardiness. Though he knew there would be no food, he  wanted them to know that they should not be worried about him.

His host opened the door and was unable to control his displeasure. He lashed out at Hillel, “What is wrong with you? Every day, we provide you with your meals. All we ask is that you be on time. Is that too much to ask? The only reason you eat is because of us. Don’t you think you should be more responsible?”

“You are so very right,” Hillel said. “I need to be more responsible about coming on time, and I need to be more sensitive to your family. Bli neder, it will never happen again. But there’s one thing you said that I need to correct, and I say this with the greatest humility: You said that the only reason I eat is because of you, but my rebbe’im have always taught me that the opposite is true. The only reason that you eat is because of me. The only reason that Hashem provides you with your parnassah is so that you can support bnei Torah.”

Tears filled the ba’al habayis’s eyes and he said, “You are correct, and I apologize. You learn Torah and don’t worry about anything else. And I will worry about supporting you.”

Not only does supporting a talmid chacham provide the supporter with parnassah,but the Gemara (Pesachim 53b) teaches, “Kol hameitil melai l’kis shel talmidei chachamim zocheh v’yosheiv b’Yeshivah shel Ma’alah—Anyone who casts merchandise into the purse of Torah scholars is rewarded and sits in the Heavenly Academy.”

Rav Nosson Kupschitz stated that this is the number-one chiyuv in Klal Yisrael. Furthermore, he assures machzikim that they are most certainly counted among those who provide melai l’kis shel talmidei chachamim,who will be zocheh to sit in the Yeshivah shel Ma’alah.

Machzikei is turning to you and asking for your generous support. The dividends will be enormous, the benefits indescribable. You will be zocheh to assist chashuve, temimus’dige talmidei chachamim.And this will inevitably bring brachah in your own life while saving you a seat in the Yeshivah shel Ma’alah.

The time is now.

The opportunity is yours.

Please don’t let that girl come home mortified after a fruitless trip to the grocery store.

“[This is] a rare chance to be able to support the gedolei talmidei chachamim,whom we live from their zechusim.” —Rav Yerucham Olshin

“I personally know many of the recipients, and they are true talmidei chachamim muvhakim.” —Rav Moshe Sternbuch

“[They are] tremendous talmidei chachamim from all over Eretz Yisrael. Ashreichem that you are zocheh to take part in this mitzvah.” —Rav Dovid Cohen