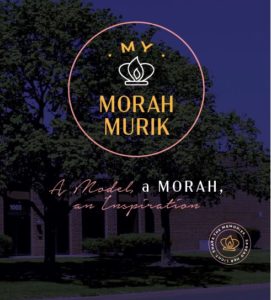 My Morah Murik: A Model, a Morah, an Inspiration

On a snowy morning, standing outside of the school building is a woman with a slight frame, a huge smile, and an even bigger heart. The school bus screeches to a halt, and as the students pile out, she doles out hugs, kisses, and words of encouragement. The girls beam with pride, absorbing the warmth like geraniums soaking up the sun. This is what a typical day looks like for this school. It’s no wonder the girls love going.

“My daughter is a real camp kid, but she always says, ‘Ma, I like school more than camp.’ My daughter just loves school.” says current parent, Tzipporah Krohn.

In a world where reaching our students is an ever-growing challenge, this sentiment is a refreshing anomaly. The secret behind it? Mrs. Sarah Murik a”h.

With her unique approach to chinuch, Morah Sarah Murik built two thriving communities, one in Chicago and another in Lakewood. Strong, steadfast, and down-to-earth, yet overflowing with compassion and love, Morah Murik started her career in soul-building when the Vietzner Rav hired her to serve as the principal of Joan Dachs Bais Yaakov in Chicago. A Sarah Schenirer–like pioneer, she built the school from the ground up. Morah Murik combined ruach Yisrael saba, her rich upbringing in Eretz Yisrael as a young child, with her own inimitable personality and approach in her chinuch habanos work. Under her wing, the school blossomed from just a handful of children to over 1,300 students. The Chicago community, a once-spiritual desert, grew with it and became a thriving Torah community. “People move to a place where their children can get a good chinuch—and Chicago became that place,” says Rabbi Avrohom Brownstein, vice president of Joan Dachs, who worked together with Morah Murik.

After building generations of talmidos in Chicago, with close to 50 years of chinuch experience behind her, the inimitable and indefatigable chinuch legend moved to Lakewood. There, she founded Bnos Brocha, named after her revered role model, her mother. Morah Murik brought her successful track record in chinuch,her unique legacy, and her special, vibrant flavor from Chicago to Lakewood.

Morah Murik lived the dictum that chinuch should be grounded in joy, love, and real life. “She brought love and warmth to education,” says a grandson of Morah Murik. “She built the school on a model of joy.”

Shloimy Zeldes, her grandson, adds that Bnos Brocha students thrive from the excellent curriculum and stellar education imparted in each classroom. “But Morah Murik’s unique approach to chinuch dictated that it’s not enough to just learn. Learning needs to be done from a place of joy,” says Shloimy. Her motto was, “I love Hashem, and Hashem loves me.” Morah Murik’s unwavering and steadfast emunah was conveyed to her talmidos based on that outlook.”

“Every time I visited, I was struck by the positive energy and atmosphere in the school,” says Ozer Goldberg, a grandfather of one student. With typical Morah Murik verve, she danced in the hallways with the girls singing “Ivdu es Hashem b’simchah” and ran in circles around the parking lot with them so they’d all get a healthy dose of vitamin D—and more importantly, so they’d imbibe her message. And her message was clear: knowledge is important, but the Jewish way of life is the flower of that knowledge, brimming with purpose and joie de vivre.

To Morah Murik, education, love, and connection were mutually inclusive. “It was not enough that the student body should be ninety percent cared for; it was essential that every student be one hundred percent cared for,” says Shloimy. Never one to hide behind her work desk, Morah Murik was described as a “whirlwind of motion and emotion” and a “b’soch ha’am ani yoshev,” weaving her way in and out of student circles and being involved in every aspect of their education. With vitality and warmth, she contributed to all the school plays, dropped into classrooms to take part in the lessons, and reviewed every student’s test, adding her trademark smiley face stickers and personal notes. “She took a really deep, personal interest in every student. She made it her business to know what they were up to so she could help them if they needed help so she could daven for them if they had a problem that needed tefillos,” says Penina Moskovits.

An endless song of Hallel

In the halls of Joan Dachs and later, in the halls of Bnos Brocha, Yiddishkeit took on a life of its own. Morah Murik instilled a special appreciation for Rosh Chodeshin her students—it wasn’t merely a day to wear a white shirt, but an expression of joy in the Yamim Tovim and the exalted role of Jewish women. She made sure to remind the girls about Shabbos Mevarchim and even announced when itfell via robocall during the summer months. “I think my grandmother also loved Rosh Chodesh because it was a chance to say Hallelto Hakadosh Baruch Hu,” says Shloimy. “My grandmother’s life was all about appreciating Hashem and the good in life—and she made sure to instill that in her students.”

It began with Rosh Chodesh and extended through every Yom Tov, every parshah, and every tefillah. Everything came alive under Morah Murik’s tutelage. Her passion for Yiddishkeit wouldoverflow and embrace her talmidos, sweeping them up in the joys of avodas Hashem.

Morah Murik passed away on 28 Adar and was buried in Eretz Yisrael last Rosh Chodesh Nissan but her legacy lives on in the school; in every teacher, and in every student. “There’s a palpable feeling of joy and warmth in the school—when I visit, it feels like home,” says Tzipporah Krohn.

What were the attributes that fueled Morah Murik’s incredible impact on Chicago and later, in Lakewood? “Compassion, empathy, love—and of course daas Torah—formed the basis of her educational approach,” says Rabbi Brownstein. In Morah Murik’s words: “Ahavas Hashem, ahavas Yisrael, ahavas hachachamim…you have those three things, you have everything.”

While some build curriculums, and some build schools, Morah Murik, first and foremost, built people.

In honor of her first yahrtzeit, we are collecting stories about Morah Murik. We will be printing a biography to perpetuate her legacy. To submit your memory of Morah Murik or to sign up for updates and receive text reminders for Shabbos Mevarchim, visit: Mymorahmurik.com, or email memories@mymorahmurik.com.