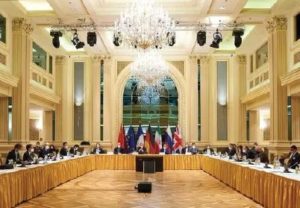 The United States is rightly pressuring allies, partners, and adversaries alike to take robust action in response to Russia’s invasion of Ukraine. Many are listening. Even China—no friend of the US and an ally of Russia—has at least qualified its public support for Russia, fearing the loss of valued trade and political relationships in Europe.

Yet the Biden administration doesn’t seem to care that certain nations, friend and foe, keep happily snuggling up to Moscow.

In the case of India, which has refused to join international sanctions imposed on Russia, there is at least an understandable reluctance to retaliate. Although India has defended Russia’s international legitimacy and abstained or voted in Russia’s favor on important votes in the United Nations, the Biden administration has reasons not to overplay its hand and risk losing Indian cooperation against China. At least there is an important strategic point in not squandering Washington’s relationship with India over Russian aggression.

However, no such rationale exists concerning Iran. And this makes Biden’s desperate attempts to restore the Iran nuclear deal at apparently any cost all the more pathetic.

The Islamic Republic’s leaders are publicly spitting in Biden’s face. In recent days, Iran has voted against Russia’s expulsion from the UN Human Rights Council. It has pledged to strengthen its economic ties with Moscow, even as Russian atrocities are broadcast across the world for all to see. Ayatollah Ali Khamenei’s state media also suggest that Iran will honor Russia’s demand to purchase Russian oil with rubles—a symbolic and practical tip of the hat to Russian president Vladimir Putin that will also help prop up his currency. Put simply, as Biden seeks to align the international community against the outrage occurring in Ukraine, he is nonetheless rewarding Iran for proudly standing shoulder-to-shoulder with the architect of the atrocities.

At the very least, Biden should be calling out Iran for its complicity in cruelty. A more serious response would involve sanctioning all Iranian companies and persons engaged in dealings with Russia. Instead, the president holds his tongue. That’s because his desire to reach a nuclear accord with Iran supersedes all moral and practical considerations. As outraged as Biden claims to be by Russia’s actions in Ukraine, they are apparently not bad enough to hold the hostile nation of Iran accountable for its complicity therein.

To his credit, President Biden has stood firm on one key sticking point in the negotiations with Iran: he is refusing to take the Iran Revolutionary Guard Corps (IRGC) off the United States’ list of terror organizations. The IRGC was first designated a terror organization in 2019 by the Trump administration and Biden doesn’t plan on changing that.

However, it doesn’t negate the obvious prostrations President Biden and his team of negotiators have made to the Iranians, doing all but openly begging them to rejoin the 2015 nuclear accord. And it is even up for debate whether Biden is refusing to delist the IRGC out of his own principles or because of bipartisan blowback in Washington against the plan.

For nearly a month, it was reported that the Biden administration and the US negotiating team were seriously considering taking the IRGC off the list of terrorist organizations. But once that became public, pushback against the deal began growing, including from the military.

Testifying before Congress last week, Chairman of the Joint Chiefs of Staff Gen. Mark Milley broke with the White House talking points and stated his opposition to the Biden team’s plan to delist the IRGC as a foreign terrorist organization. Numerous members of Congress signed onto letters saying they would not be able to support any deal that delists the IRGC.

Numerous US negotiators have quit the delegation conducting negotiations with Iran in Vienna, apparently in disagreement with Biden’s inordinately conciliatory posture. But Secretary of State Antony Blinken and Biden remain unmoved. They have repeatedly extended the deadline for Iran to reach a deal. The scale of this American submission is astonishing. Though Biden now insists on keeping the IRGC on the terror list, Biden administration officials still refuse to bring charges against Iran’s Islamic Revolutionary Guard Corps assassins who have plotted to kill former Trump national security adviser John Bolton.

A bipartisan coalition in Congress believes that the administration is giving Iran far too much and getting a precious nothing in return. If the old nuclear deal or some version of it is restored, expect major resistance on Capitol Hill that will only grow if Republicans take back control of Congress in November.

What Russia is doing in Ukraine is an outrage that demands universal condemnation. It’s one thing to excuse a friendly country such as India for failing to join in due to complicated diplomatic considerations. But for a sworn enemy like Iran (not a democracy, not a major trading partner, and not a counterbalance against China), Biden has no business extending this free pass.