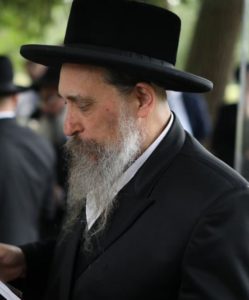 The Rav Who Kept Nothing for Himself

It was just about 10 years ago. The Mattersdorfer Rav zt”l had come for a prolonged stay in Lakewood due to the tragic passing of his beloved son. He chose to daven in the Zichron Yoel shul, led by Rav Leibel Gruber.

As soon as Rav Gruber, a brilliant talmid chacham and by then an established rav, who had built and then led the shul for close to two decades, realized who the shul’s guest was, he approached the elder rav and told him unequivocally that as long as he was in Lakewood, Zichron Yoel was his.

This went on for six months. The Mattersdorfer Rav was the rav of Zichron Yoel; Rav Gruber kept nothing for himself.

It wasn’t just the Mattersdorfer Rav.

Any visiting rav or talmid chacham, even if he was many years Rav Gruber’s junior, was given the honor of speaking at shalosh seudos.

There was nothing that Rav Gruber needed for himself, even if it was accepted practice. A yungerman in shul was going through a health crisis; he received the aliyah of Aseres Hadibros on Shabbos Parshas Yisro—a prestigious aliyah usually reserved for the rav—since it ends with the words “Ani Hashem rofecha—I am Hashem your healer.” For Rav Gruber, it was natural.

He didn’t want kavod, accolades, attention, anything. “It’s not that he was an anav,” Rav Mordechai Dov Geldzhaler of Monsey, a former mispallel at Zichron Yoel, explains. “He just didn’t have any needs. He didn’t exist.”

All that mattered was that “yener,” the other person, should get what he deserved or desired. That need or desire was more often than not unexpressed, but Rav Gruber heard it anyway. He had an uncanny ability to understand what each person needed to hear, what comment would shine some more sunlight on his day. This was true for every man, bachur, and child in shul or elsewhere.

A yungerman in his 20s started giving a daf yomi shiur in shul. Rav Gruber would attend on occasion so he could listen and be able to compliment him.

There were many bachurim from the neighborhood whose fathers davened elsewhere, who would stop in Shabbos morning for davening. Although they were not part of the kehillah, but they felt loved and respected, and more than anything, they felt comfortable. So many of them attest that they loved to come to shul just to encounter Rav Gruber, to feel his hartz, his energy, his simchas hachaim. The Rav would approach them after davening and inquire about their week, about their struggles and their successes.

He extended this care to everyone and anyone.

To a family of young yesomim in the area, Rav Gruber became a father figure who remembered them long after the tragedy was out of the spotlight and everyone else had forgotten their plight.

He had a unique custom of calling numerous almanos each Erev Shabbos to share a word of chizuk. Often on Erev Yom Kippur during the seudas hamafsekes, moments before day’s end, he would remind himself of yet another person he could call to warmly wish a gut yahr, and he would immediately pick up the phone to do so.

Some 25 years ago, Rav Gruber founded the shul, a place for serious chassidishe yungeleit to daven and grow together.The davening was conducted with intense emotion and bren, and speaking during the tefillos was verboten—the members of the kehillah accepted upon themselves to uphold this standard several few years ago, at the Rav’s urging, and many of them saw yeshuos.

Many of the mispallelim were the same age as the Rav, and they found in him a friend, a listening ear, and a talmid chacham to guide their lives. They felt at ease there because Rav Gruber never commanded or demanded respect. He was just one of them.

He was so uncomplicated, so easy, so approachable. “My only shittah is not to be a ba’al shittah,” he once quipped.

There wasn’t a time when he wasn’t available for people in the entire community. His phone was always on, and he was often found dealing with crises, answering she’eilos, and assuaging fears even at three o’clock in the morning.

The Shabbos Shuvah drashah was a yearly highlight which attracted numerous former mispallelim who would walk from far and near to attend. True to the Rav’s persona, the drashah was given in a way that everyone—from the young bachur to the elderly talmid chacham—could understand and appreciate it.

It was the same talent that he used in the classroom as a maggid shiur in Mesivta Meor HaTorah (Rav Avrohom Shemano’s yeshivah). He was engaging and exciting, getting the whole class involved, even the bachur whose cheshkas haTorah was not up to par. Many former talmidim credit Rav Gruber with changing their lives forever. He would not only teach them; he would reach their neshamos.

Besides being a moreh hora’ah and superb maggid shiur, the Rav was also a magnificent ba’al tefillah whose sweet, powerful, and stirring voice inspired all in attendance with his hartz, bren, and regesh. The Rav never did things half-heartedly, but davening was one area where his genuine and complete dveikus to Hashem was readily apparent. The tefillos on Yamim Nora’im, Akdamus, and even sefiras ha’omer left an indelible impression on those who were fortunate to hear them.

But there was nothing like Simchas Torah in his shul. Rav Gruber made certain that every bachur and every child in shul was fully involved, that they too felt the joy of the day, and that they felt wanted and important.

And they all wanted to stay in shul. The entire time.

Then came the sixth hakafah. The Rav would lovingly grasp the Sefer Torah in his arms and dance around the bimah. Everyone else would circle around, singing, rejoicing. There was just one person who would join the Rav in the innermost circle: the autistic boy in the neighborhood who knew to look forward every year to the moments when he and the Rav would go round and round, the Rav’s joy at being mesame’ach another Yid fusing with the boy’s own joy.

He was always on the giving end. There were times when the gabba’im in shul saw a need to fundraise in order to ensure the proper functioning of the shul. But Rav Gruber would not hear of it. He should ask someone for help, for something that was related to him? Impossible! He had no problem raising funds for countless families for Yom Tov, for chasunahs, for tuition…but for “himself” was something else.

A few years ago, the kehillah was shocked to hear that their beloved rav was ill. But if anyone thought that they would now have the opportunity to finally do something for the man who did so much for them, they were mistaken.

Rav Gruber would not allow anyone to drive him to receive treatments. He could drive himself, he insisted. And when he would return, he would head directly to yeshivah to give shiur, as if it was the most normal thing. He was weak and nauseous, but he did not give up the opportunity to teach his teiyere talmidim. He often had to stop on the way up the steps just to catch his breath, but he persevered.

These last few years revealed a new side of Rav Gruber. “My father was always so easygoing about everything. We felt like nothing really mattered,” R’ Chaim Yitzchok Gruber says. “But suddenly, we realized that our father, whose usual motto was, ‘S’iz git—It’s fine,’ had an ironclad conviction and relentless willpower.”

On a Friday night a few months ago, Rav Gruber was lying in the hospital recovering from an intense surgery, semi-conscious. A son who was there saw him open his eyes and asked if he wanted something to eat.

But Rav Gruber was not ready yet. He insisted that they first say Shalom Aleichem, and he concentrated intently on each word. Only when he finished did he allow his son to recite Kiddush.

Three weeks ago, Rav Gruber told his eldest son, “I don’t have the mental capacity to learn. So I’ve been thinking a lot recently.”

He continued by requesting a few things from those who knew him. One of them was that people should learn l’iluy nishmaso since he felt that his love for other Yidden had somewhat curtailed the time he’d had for the other thing he loved most: learning Torah.

Rav Gruber passed away on the 36th day of the omer, the sefirah of chessed she’b’yesod.

Thousands of people mourned the loss of this larger-than-life man. He was their father, their rav, their friend. And he showed them that one can be derhoiben and holy and still look for opportunities to heap kindness upon a fellow Yid.