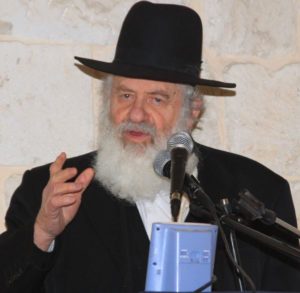 A hush fell on the multitudes of people gathered in Bais Faiga hall. They had come from all over Lakewood to attend the Annual P’eylim Lev L’Achim asifah, and it promised to be an inspiring evening. An elderly talmid chacham with a long white beard and suit sans tie had just begun to speak. He extolled the accomplishments of the indefatigable volunteers of Lev L’Achim. Then he opened a sefer full of chiddushim on sugyos in Shas. He began reading the names of the authors of the various simanim and the names of the sugyos, stopping at various points to exclaim, “These bachurim just learned their first blatt of Gemara two years ago, and now they’re writing chiddushim on so-and-so sugya!” He looked like a proud grandfather schepping nachas from his grandchildren’s accomplishments.

There was no one better equipped to talk about such topics—no one who understood better the idea of living a life devoid of Torah and kedushah only to make a complete turnaround upon tasting the sweetness of Torah, no one who better understood those precious bachurim and the challenges they faced—than the living legend standing in front of them. They had just witnessed an example of someone who overcame numerous obstacles to become a full-fledged talmid chacham. They had seen perhaps the greatest ba’al teshuvah in our day and age, a modern-day version of the great tanna Rabi Akiva. His name was Rav Uri Zohar.

R’ Uri was born 86 years ago in Israel to a secular Jewish family. As a young adult he majored in philosophy in university and then served in the IDF, after which he found himself drawn to the film industry. Uri ultimately became Israel’s leading actor and producer. He was extremely popular and was living the dream life—he lived in a mansion on the Mediterranean Sea and was the guest of wealthy celebrities all over the world. His views were the antithesis of Torah, but nothing seemed to be lacking in his life, and there weren’t any signs that he would soon undergo a major change in his lifestyle.

One day in the 1970s, when he was approximately 40 years old, he met Rav Yitzchak Shlomo Zilberman zt”l at a party. Rav Zilberman told him, “I can prove to you that there is a Borei olam, but first you have to realize that such a fact obligates us to live as the Borei olam wants us to live,” and he invited Uri to his house to continue the discussion.

In what R’ Uri would later say was “the Eibershter bringing him,” Uri arrived at Rav Zilberman’s house to talk. Rav Zilberman shared with him the halachah that only animals that chew their cud and have split hooves are kosher. He told Uri that there are only four animals that have only one of the above, rendering them tamei, and challenged Uri to find out if what the Torah stated so many thousands of years ago is true.

Uri called the leading zoology professor in Israel and asked him how many different species of animals were born in the last several decades. The man told him that in the last 40 years, over 10,000 species were discovered and inexplicably, not one of them has one siman of kashrus and not the other. Then the professor asked him, “Are you sitting with a rabbi? Give it up; we scientists cannot explain why it is that they all have both conditions!”

Uri was blessed with a brilliant mind, and when something intrigued him, he felt compelled to get to the bottom of it. And so began his journey toward truth.

It progressed in stages, including wearing a yarmulke and tzitzis in public before a shocked crowd, biking on Shabbos to visit his in-laws instead of driving, and being careful not to leave his home on Shabbos for fear of transgressing any issurim. Before long, he stunned the country by leaving his career behind and joining a yeshivah, where he began to learn full-time. It wasn’t long before his wife and three children followed in his footsteps, taking on Torah observance and supporting him in his new life.

He went on to become a distinguished talmid chacham who learned Shas several times. In addition, he became proficient in Zohar and numerous other Torah works. He never wasted a second of learning; while waiting for a meeting, he could be found engrossed in a pocket Mishnayos.

Similar to Rabi Akiva, he would often say that he was really born when he was 40. When he was 76, someone asked him how old he was, and he answered 36.

One Erev Pesach, Rav Chaim Pinchas Scheinberg zt”l made his way as usual to biur chametz, where he met Rav Uri Zohar, who had also come to burn his chametz. But he had something else with him besides food. R’ Uri had purchased the reels of some of his films; once they were his, they could never be copied or used by anyone else. He took the reels, estimated at a value of 1–2 million dollars, and threw them into the fire along with his chametz. When Rav Scheinberg was apprised of what had just happened, he went over to R’ Uri and danced with him in front of the fire. Whoever was there said they saw a taste of Gan Eden.

After he became frum, R’ Uri sold his mansion and moved to an apartment in Kiryat Mattersdorf. It was large enough that he was able to comfortably raise his children there, and eventually both his parents and his in-laws moved in to live with the family until their passing. After his children left the house and the grandparents passed away, R’ Uri felt he didn’t need such a large apartment, and he moved into a one-room apartment. He had seen everything there was to Olam Hazeh and didn’t feel the need to indulge in it anymore.

Yet he held onto his connection with the world of his youth. R’ Uri had a list of the names of his friends from his days in the film industry, complete with their mothers’ names, and davened for each one. Whenever one of them passed away and there was no one to say Kaddish for him, R’ Uri said Kaddish. Despite his lifestyle change, he never lost sight of the fact that Hashem had given him a special talent and a colorful background, and it was his job to use these to be marbeh kvod Shamayim.

Like Rabi Akiva, who taught Torah to 24,000 talmidim, R’ Uri quickly became known for his uncanny ability to bring Hashem’s children close to Him through his decades of work for Lev L’achim as well as his numerous inspirational speeches. No less a gadol than Rav Elya Svei zt”l said that R’ Uri was from the gedolei hador in zikui harabbim.

What was it that attracted everyone to him? What convinced so many people to change their lives after listening to him?

R’ Uri was once speaking to a group of 500 ardently secular Jews in a secular town in northern Israel. He said that the difference between missionaries and the audience was that missionaries care deeply about religion and are willing to pay a lot of money to convince Jews to join them, whereas the assembled didn’t care at all about their religion.

A man jumped up and screamed, “You too are a missionary!”

Without missing a beat, R’ Uri responded, “Am I a chareidi? I’m also chiloni; I’m also a movie star. I just happen to keep Torah and mitzvos.”

When Rav Avraham Pam zt”l heard the story, he said that R’ Uri’s secret to his success was clearly his communication skills. He didn’t speak about lofty topics, but rather spoke to his audience as equals and drew them close, lifting them up and raising them higher in their avodas Hashem.

His kiruv extended to FFBs as well. He worked very hard to ensure that kids who had left the fold remained part of their families and communities, and he did whatever he could to help them return to Torah. He would say that these children are “anusim, not meizidim (innocent, not intentional)” and coached parents to shower them with unconditional love. He saved many neshamos this way.

Yet as successful as he was, it wasn’t what he wanted to do; he wanted to sit and learn and make up for all his lost years. But his fealty to da’as Torah was sacrosanct, and when Rav Shach zt”l told him his tafkid was kiruv levavos, he accepted what he called “the gezeirah” wholeheartedly. In fact, the first time he was slated to travel to America, he asked Rav Elyashiv if he was allowed to go, since he might miss a tefillah with a minyan. Rav Elyashiv responded, “Who says you’re ever allowed to daven with a minyan? Maybe you should be spending your time nonstop working with Hashem’s children!”

Gimmel Sivan, the first day of the Sheloshes Yemei Hagbalah, in which Klal Yisrael prepared for kabbalas haTorah, dawned bright and early. R’ Uri awakened early as usual to begin his day of nonstop learning and avodas Hashem. After he finished one of his learning sessions, he suddenly collapsed. Hatzolah tried valiantly to resuscitate him, but the gezeirah was sealed—the man who had spent over 40 years preparing for the ultimate kabbalas haTorah had slipped away with a misas neshikah.

At the levayah, Rav Eliezer Sorotzkin, director of Lev L’Achim, declared that there is no ba’al teshuvah in Eretz Yisrael over the last few decades who doesn’t owe his return to observance, at least in part, to the larger-than-life figure of R’ Uri Zohar zt”l.