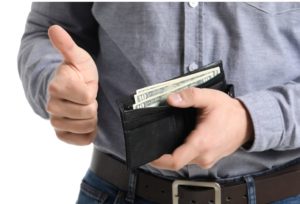 Shamai Langer was excited to read the best-selling book Rich Dad Poor Dad (RDPD). Shamai earned barely enough money to keep his head above the water. Perhaps this book held the answers. After all, RDPD was still a best seller after decades in print, with over 30 million copies sold! The book claimed to offer the financial tips that “rich people teach their kids that the poor and middle class don’t.” Also, the author, Robert Kiyosaki, apparently had a knack for explaining difficult concepts in simple terms. Shamai’s father had struggled with money too; could this popular book reveal what his “poor dad” couldn’t?

RDPD contrasts two vastly differing attitudes and approaches to earning and spending money. Poor Dad, Kiyosaki’s biological father, is book smart but timid, trapped in the “rat race” of a job and “buying liabilities.” Rich Dad, an adopted mentor, is street-smart and gutsy, building a business empire which hires the “rats” and grows wealthy off their labor. Robert comes to appreciate Poor Dad’s selflessness as an educator but is still glad to have been groomed by a hard-nosed rich dad to become a “hard-core capitalist.”

RDPD has remained on my shelf for years despite the serious misgivings I have about it. On the one hand, the book imparts important financial advice and motivation in a uniquely powerful way. On the other hand, this core is then fluffed up with simplified clichés, anecdotes, and tangents. Worse, the whole premise of RDPD is condescending to the non-wealthy. Additionally, the fact that the nebach protagonist is the author’s own father makes the book a bit hard on the stomach at times. Perhaps it’s not surprising, then, that financial reporters have revealed that Kiyosaki’s literary success is more about slick showmanship than financial acumen.

“Sheker ein lo raglayim”—falsehood can’t stand. RDPD remains on best-seller lists because it contains important kernels of truth. Most adults are primarily focused on their jobs instead of creating passive investment income. Job salaries are capped by bosses and trimmed heavily by government taxes. Through “buying liabilities”—incurring large mortgages, car leases, and credit card debt, which drain cash flow, many become entrapped. As a result, they need to keep working ever harder to cover ever-growing negative cash flows. People caught in this cycle lack the savings with which to buy income-generating assets which offer the exit ramp from the “rat race.”

A different education and mindset

Kiyosaki argues that what’s needed to avoid this trap is financial education and a growth mindset. Poor Dad’s overemphasis on technical knowledge comes at the expense of educating students how to capitalize on opportunities with much greater potential. More focus should be on the language and tools of money: accounting, investing, entrepreneurship, and marketing. But even with these economic skills, those pursuing wealth need the confidence and desire to pursue opportunity. Many people are overly fearful of failure or have negative attitudes toward the rich. It’s exceedingly difficult to reach a goal that is laden with emotional baggage.

I was impressed with RDPD’s incisive presentation of some complex accounting concepts and agree with some of its lessons. Most Americans do need better financial education, and many find themselves mentally and economically boxed in. But the book is long on breezy clichés and simplistic generalizations and short on practical guidance. Kiyosaki claims that “anyone can achieve great wealth” because “it’s not rocket science” and “there are millions of ways to achieve your goals.” The vague ideas he offers toward attaining these goals include “asking successful people what they do,” listening to audiobooks, and choosing friends carefully.

To bolster his claims about the easy ways rich people “create wealth,” he shares various personal anecdotes. Kiyosaki once supposedly bought and flipped a house with 100% financing, turning a $40,000 profit in just five hours! Another avenue was buying shares in tiny companies that were about to go public, turning $25,000 into a million in less than a year, he claims. If “you know what you’re doing,” these investments are “simple and possible,” and those who don’t capitalize on these opportunities are too “scared, lazy, or small-minded,” the guru proclaims boldly.

Beyond the sadness of a situation in which a son uses his father’s frustrations and supposed limitations as a symbol of failure, Kiyosaki’s get-rich-quick ethos ring hollow. Obviously, Hashem controls who gets what; there’s no surety to anything we do. But even in basic hishtadlus terms, most wealthy people work hard and take risks to find and exploit opportunities that will prosper over time. And not everyone has the skills, temperament, or financial flexibility to open companies, find investments, or take significant financial risks. While half the book offers solid lessons about financial structures, discipline, and vision, the other 50% is junk.

Over the years since his book made him famous, Kiyosaki was revealed to be a sketchy fellow. He admitted that much of the book, including his Rich Dad, is fictional, made up as a form of parable. More fundamentally, the author’s wealth was largely created not from spectacular deals as implied, but from entry fees to RDPD seminars. Kiyosaki offers to reveal further financial secrets at these gatherings. RDPD seminars have been the subject of lawsuits and exposés for overselling get-rich-quick schemes. Kiyosaki clearly didn’t inherit his poor dad’s selflessness.

Even within the book there are hints that Kiyosaki is twisting his history, philosophy, and investment capabilities. After graduating college (which he disparages) in the 1970s, the young Robert worked in the “rat race” for Xerox. Later, in the aforementioned anecdote about making a killing in real estate in the 1990s, he mentions borrowing $2,000 for the down payment; he says his money was otherwise tied up. Still, we’d expect someone who could make money quickly and easily to have an extra two grand two decades into his career! It seems that what Kiyosaki excels at is selling books. He should write a volume about that!