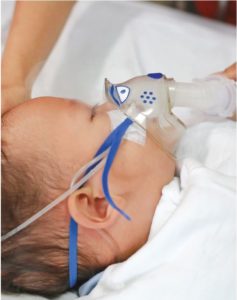 With the COVID-19 crisis dissolving into endless disputes over vaccines and masks, another viral specter may be rising. A common respiratory illness is behaving strangely, infecting much higher-risk patients than usual, and spreading rapidly during a season in which it is usually dormant. Experts think the virus’s odd showing may be connected to COVID-19.

Respiratory Syncytial Virus, or RSV, is a virus that usually manifests as little more than a common cold in adults, or as bronchitis, bronchiolitis, or pneumonia in toddlers. It can be dangerous for infants. According to the US Centers for Disease Control (CDC), most children have had RSV by age two, without severe incident.

The virus’s acute season is usually during the winter, and it generally recedes with the onset of warm weather, similar to the flu. But after a dormant winter, the virus has exploded in Lakewood, Williamsburg, Borough Park, Bensonhurst, Kensington and Flatbush since April. It has infected vulnerable babies, and an alarming number have been hospitalized. “We usually get a spike in October,” CHEMED pediatrician Dr. Joanna Beizem told the Voice of Lakewood. “This year, we are seeing it in April and May.”

Health Departments in New York and New Jersey have taken note, fearing the outbreaks in the Orthodox Jewish community are a canary call for what is to come in the rest of the country. According to the NYDOH, there were 10 documented cases of RSV in Brooklyn during the last week of February. During the first week of April, there were 294.

This year, the normal RSV season passed with hardly any cases. Like the flu virus, RSV receded during the COVID pandemic. Doctors in Lakewood and Brooklyn said they saw few or no cases this winter and fall.

Why is the virus breaking out in the wrong season? A similar phenomenon occurred in the southern hemisphere, where the summer is in December and January. Australia saw an outbreak in September and October, as the weather warmed. Doctors in the country speculated that lockdowns last year kept people from contracting RSV, meaning people who would normally be immune to it were susceptible to catching the disease as the country emerged from lockdowns. A similar trend may be developing here.

“Nursing mothers, who would protect their children through passive immunity, aren’t able to give that robust immunity to their children this year because the mothers were not exposed to these viral illnesses last year as they usually are,” Dr. Zyskind said. “Also, a lot of the toddlers who get mild illness skipped the typical RSV season last year, have no immunity to RSV, and thus pass it to their siblings or neighbors.”

“Parents and guardians are encouraged to keep sick children at home and prevent anyone with cold-like symptoms from coming in contact with young children,” the Health Department is advising. “If children are having difficulty breathing, are wheezing, or not eating or drinking, parents should contact their health care provider immediately.”

Another theory suggests that COVID-19 itself actually prevented RSV from spreading. Dr. Ben Katz, a professor of pediatrics at the Northwestern University Feinberg School of Medicine and an expert in infectious diseases, said that one virus will crowd out others. “When one virus comes into a community, others usually go away,” Katz said. This would also explain why this year’s flu season has been nearly nonexistent, bypassing the nightmare scenario some feared in which the flu and coronavirus spread simultaneously. Doctors are already anticipating the possibility of a more intense flu season next year due to the fewer number of people who contracted the illness this year.

What remains a mystery is why RSV would spread in Lakewood and New York just now. Orthodox Jewish families clearly have more children per household who are able to pick up the virus in school and bring it home to younger siblings. But schools in Orthodox communities have been open since the beginning of the school year, and no significant change in exposure has occurred in recent months.

“We’re trying to figure out why we’re seeing it here first,” Zyskind said, noting that day cares across the country have been open for months. “But I really don’t know why it’s happening in our community.”

Dr. Beizem reports that the virus is spreading rapidly in 35 states, and that many countries have also seen a delayed season. She says Lakewood’s unique spike is just a standard reflection of the large child population of the town.

What should parents look for? Dr. Beizem says that because RSV begins just as does a common cold, it is difficult to isolate from potentially symptomatic people. High-risk infants, such as those with heart or lung disease, or premature birth, should do so.

A statement by Lakewood’s Pediatric Affiliates notes, “When airways get inflamed in young children, they often will start to wheeze, meaning air and the oxygen in it have difficulty getting through these narrowed, swollen airways.” Dr. Shanik’s office says an infant’s symptoms may begin with a runny nose, a fever, and a harsh, tight cough.

Dr. Beizem says key symptoms that distinguish RSV from the common cold are loss of appetite and worsening condition after seven days. “If a child has had a common cold for a week and it is not getting better, and even getting worse, it may be RSV,” she told the Voice.

RSV usually resolves itself, and there is no treatment or vaccine, but “parents shall call their pediatrician if a child’s breathing becomes labored or difficult,” Pediatric Affiliates advises. Much talk about developing a vaccine has been bandied about the scientific community, but one will definitely not be available for this season.

Prevention may be possible for high-risk cases. “The usual steps to prevent any virus, like the flu or COVID-19, work for RSV,” Dr. Beizem says. “Lots of handwashing, especially when the kids get home from school, and disinfection of countertops and day care surfaces.” RSV can live for 24 hours on hard surfaces without moisture, making disinfection all the more important.

For infants classified as high-risk, a monoclonal antibody treatment may be approved. It is given by injection once per month, and helps prevent serious illness from RSV. “If your infant was born premature (under 32 weeks) or has cardiac or lung conditions, your child is at a greater risk of complications from RSV bronchiolitis,” Dr. Shanik’s office says. “A product containing a specific antibody to RSV has been approved for monthly administration to help prevent RSV infection in these high-risk children. This form of antibody against RSV has the advantage of being able to be administered once a month by intramuscular injection. In large, controlled studies, this product has been shown to decrease hospitalization from RSV infections in these high-risk infants.”

Dr. Beizem cautions parents from making a run on doctors for the antibody treatment. “It needs to be approved by insurance for special cases, she explains.

COVID-19 may be over, but the ripples it has made in the balance of life are just beginning. “We live in a very delicate ecosystem in balanced equilibrium,” Dr. Zyskind said. “The lockdowns were necessary to stop COVID, but there’s going to be a cost on the other end for other viral illnesses that were skipped during that time.”