The Event of Kavod Hatorah 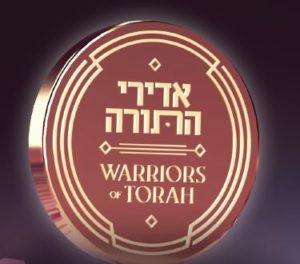 An Evening Celebrating Our Yungeleit

It will be the event of the decade, a maamad of kavod haTorah and kavod Shomayim so unique and unparalleled in its mission.

Special guests from Eretz Yisrael will join with those on these shores to inspire and uplift.

Leading roshei yeshivah, admorim, and rabbanim from across America will grace the massive dais.

The program will leave the 20,000+ participants inspired and uplifted. Attendees will have the privilege of hearing from gedolei Torah, including Hagaon Rav Dovid Cohen, Rosh Yeshivas Chevron in Yerushalayim, who will be traveling to the United States for this occasion.

There will be a Siyum Hashas on Talmud Bavli and Talmud Yerushalmi — both learned b’iyun in their entirety by our yungeleit — with joyous music and dancing.

It will be an evening not to be missed, with many surprises along the way.

This Sunday night, June 12, the Well Fargo Center in Philadelphia, Pennsylvania is the place to be. Doors will open at 6:15 p.m. and the reception will begin at 6:30 p.m. The program will get underway at 8 p.m. sharp.

Hundreds of buses will travel from all over the Tri-State area — and well beyond! — to bring the overflowing crowd to this maamad.

The event follows months of meticulous planning, including a widely attended meeting of all the rabbanim of Lakewood at Beth Medrash Govoha. Gatherings of local shul ambassadors ensured that every mispallel has tickets. Seemingly endless meetings of local bnei Torah and askanim took place to iron out the last-minute details, ensuring that this would be an event no one would soon forget.

The program will feature fascinating, never-before-seen video presentations, highlighting, among other things, the over one billion minutes of Torah learned at Beth Medrash Govoha each year.

Of course, the event is really about one thing — and one thing only.

Our adirei haTorah, our warriors of Torah, those who give up everything else so that they can sit and learn Hashem’s heilige Torah, with no ulterior motive.

They are the shining lights of their community, those we look up to and admire.

Bnei Torah have long recognized the esteemed nature of our yungeleit, but now, with the encouragement and direction of the gedolei roshei yeshivos, people from all walks of life will have the opportunity to express and demonstrate their appreciation for our lomdei Torah.

The Event: Continuing the Mission

Over the past year, as has been well-publicized, a group of baalei batim succeeded in raising the banner of Torah and the esteem in which yungeleit are held by stepping up in support of these lomdei Torah. By tapping into the inherent ahavas haTorah and chashivus for Torah that personifies our community, they raised the kollel checks of the yungeleit of Beth Medrash Govoha to $1,000 a month.

Raising the $57 million for the yeshivah’s annual budget is not a “financial burden,” as some might assume. On the contrary. As those involved in this effort express, it is a unique zechus — the greatest zechus imaginable — to finally provide the yungeleit what they richly deserve. And the goal is for that amount to only grow.

The baalei batim have shown each yungerman how much we, as a community, appreciate what he, as a lomeid Torah, does for KlalYisrael. The millions of dollars raised express KlalYisrael’s unwavering support for the yungerman.

The haramas keren haTorah that has been experienced over the last 12 months has had a remarkable impact. Adults and children, men and women, sat up and took notice. The yungeleit have been placed on the pedestal where they belong. And the influence has spread far beyond Lakewood. There has been an astounding ripple effect. Yeshivos, kollelim and mosdos haTorah in other communities have been inspired by what they witnessed and have courageously followed suit, raising the kollel checks of their respective yungeleit.

The upcoming event will celebrate what has been achieved over the last year, taking it to the next level, as bnei Torah and machzikei Torah unite in celebration and support of our yungeleit.

As one senior rosh yeshivah remarked, this last year has been “one large expression of kavod haTorah,” and there is no greater kavod haTorah than a maamad whose singular goal is to express our community’s admiration for the heroes who have made Torah learning their essence.

The chashivus of a yungerman has been broadcast to thousands of yungeleit around the world.

And the yungeleit have been given the feeling that a nation is indebted to them for the vital role they play.

The upcoming maamad of kiddush Shem Shamayim will demonstrate this.

Over the last year, the baalei batim behind this movement visited more than 1,000 people and reached out to several thousand more. The response was nothing short of inspiring. But this movement can still grow further. Masses of Yidden across the country and beyond want to be part of this movement. The upcoming maamad will link together all of KlalYisrael in raising the flag of chashivus haTorah.

It’s an opportunity for each and every individual to show the lomdei Torah what we, as a klal, truly value.

We recognize that the yungerman who is sitting and learning is holding up the world.

The gedolei Yisrael have expressed that this is a mission in which all should take part.

Thisevent will be like none other before it, an expression of kavod haTorah that will resonate and reverberate across the Olam HaTorah.

Yidden from across the country are counting down the hours to Sunday evening.

They do not want to miss this.

And neither do you.