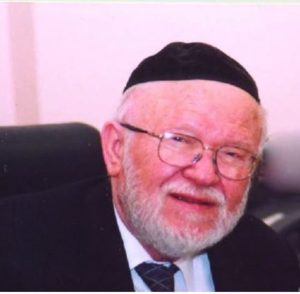 In his role as principal of Bais Yaakov of Boro Park for 66 years, Rabbi Osher Lemmel Ehrenreich raised generations of children who are devoted to Torah and yiras Shamayim, and made an everlasting impact on thousands of alumnae. The menahel was a model of patience, empathy, and compassion, teaching that Torah can only be given over when we connect with our students and they feel our love for them.

R’ Osher was born in Czechoslovakia in 1928. After moving to America as a child, he learned in Torah Vodaas under the leadership of Rav Shraga Feivel Mendlowitz, and then in Bais Medrash Elyon, which was led by Rav Reuven Grozovsky. R’ Osher served as assistant principal in Yeshiva of Brighton before joining Bais Yaakov while in its infancy.

At the levayah, Rabbi Nosson Sherman repeated a conversation in which he asked Rabbi Ehrenreich for the secret to his success. “I know what I do well,” R’ Osher replied, “and I know my limitations. I hire people to do what I cannot do well.”

Rabbi Sherman said, “He was not afraid to hire superior people, and to trust them. He had no ego; all he cared about was the success of Bais Yaakov, its students and its staff.”

R’ Osher was a brilliant person, and hundreds of parents, principals and administrators asked him for advice when making decisions. Still, he was humble and seemed easily approachable to everyone. The menahel was understanding and kind; students felt comfortable coming into his office to talk at any time. Nothing was beneath him; Rabbi Ehrenreich had no problem conducting a conversation with an eight-year-old.

He had an open school policy, accepting the children no one else would take. Bais Yaakov’s student body spanned the whole spectrum: from rebbishe einiklach to Russian immigrants.

Respected by both students and staff, the principal made sure things ran smoothly, the students were doing well, and anyone who needed tutoring or other support was taken care of.

“He was a very dedicated, hands-on principal who was involved with every student,” says Chani, who learned in Bais Yaakov decades ago. “He used to talk to all of us.”

A well-known principal described her experience as a first-year teacher in Bais Yaakov as “a failure, a flop.” At the end of the year, she met with Rabbi Ehrenreich, her boss.

“I know you won’t take me back next year,” she said shamefacedly. “This year was not a success.”

“Of course you are coming back!” was his response. “You are coming back and you are going to be successful!” The woman became a master teacher and eventually took a position as a school principal. Years later, a teacher in her school had a challenging year and wanted to give up. The principal shared her own journey and the way R’ Osher’s belief in her put her on the path to success. She ended by saying, “Of course you’re coming back!”

Rebbetzin Tabak, who has been teaching in Bais Yaakov for many years, says she felt lucky to work with Rabbi Ehrenreich. “He empowered the teachers. He trusted us, he supported us. Rabbi Ehrenreich knew how to put anyone at ease,” she continued. “A girl was at the office, mortified because it had just been discovered that she had nits. The menahel spoke with her, saying, ‘I remember when I had lice,’ so that the girl would feel comfortable.”

It was rare for a student to be expelled from Bais Yaakov, but in a recent situation where a girl had to leave, Rabbi Ehrenreich did not ask her to go until she was accepted to another school that would be a better fit for her. Additionally, the menahel paid for her tuition so that she would be able to attend the new school.

Rabbi Ehrenreich would say, “If we punish a student who doesn’t understand what she did wrong or doesn’t see the consequence as fair, we are not doing our jobs. In such a case, the child will feel angry and resentful.”

Fraidy, a former student, fondly remembers the lunch her class had with Rabbi Ehrenreich as a second grader.

“We came into his office and ate lunch with him. He sat with us and then took a picture with each of us and sent them to our mothers. It was the biggest treat.”

Rebbetzin Pilchick, who spent over six decades teaching under the guidance of Rabbi Ehrenreich, reminisces. “We were one big family. Rabbi Ehrenreich cared about the teachers; he attended our simchos and was always there for us during hard times. He was so pleasant to work with; he was so understanding and kind.”

Rabbi Ehrenreich had the ability to see things from any person’s perspective. If a student, parent and teacher were at odds, he was able to understand and validate each of their viewpoints. He was an excellent listener, a quality to which he attributed his success.

“A young student once walked into Rabbi Ehrenreich’s office,” recalls Rebbetzin Pilchick. “The secretary asked if she could help but the girl insisted it was a matter for the principal to deal with. It turned out that there was a bug in the child’s classroom, and moments later, the menahel was seen traipsing down the hallway with the student, going to get rid of the problem.”

“A student once developed anxiety,” shared Rabbi Menachem Frank at the levayah, “and she couldn’t go into stairwells. To Rabbi Ehrenreich, the solution was simple. ‘Move her grade to the first floor,’ he said. It was all about the students, all about how we can make them comfortable and happy.”

“No one was upset at him; he had no enemies. Sixty-six years of chinuch and no one had a bone to pick with him!” says another Bais Yaakov teacher. “He was a master at making people happy and avoiding conflict.”

Rabbi Ehrenreich was also a tremendous talmid chacham. He learned from a wide variety of sefarim, from chassidish to mussar; he appreciated every person and accepted whatever they had to offer.

The menahel’s warmth and concern for each talmidah will be sorely missed in the halls of his beloved Bais Yaakov.