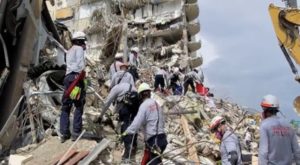 Zahava Silver
The early hours of Thursday morning saw unspeakable tragedy in Miami, Florida, as a condominium
complex came tumbling down and landed in a towering heap of rubble. The Champlain Tower complex
contained 136 units, 55 of which collapsed in the disaster. In the hours after the collapse, 35 survivors
were rescued by crews. One was a young boy pulled from the rubble; the others were individuals
stranded in the still-standing half of the complex who required assistance to exit their apartments.
Survivors and families of survivors gathered at a hastily organized family reunification point several blocks
away from the disaster site. As heads were counted and the missing were tallied, it became clear that
about 161 individuals were unaccounted for. The search began immediately.
As of this writing six days post-disaster, search teams from across Florida and other states continue to
work round the clock to carefully clear the rubble. As haunting noises and banging is heard under the
debris, the rescue teams are working with incredible caution so as not to crush the bottom layers of debris
as they clear the area. The search teams are also using sonar devices to find hollow pockets amidst the
debris and tunnel to those areas to allow greater access to survivors. So far, no survivors have been
found.
An elite IDF search unit flew in from Israel to contribute to the search. Their team leader commended the
Florida crews for their hard work and said they were doing “exactly the right thing.” The IDF team leader
also encouraged optimism, stating that individuals have survived similar disasters in other countries.
On Thursday, fires broke out amidst the wreckage under the rubble. Crews hastened to extinguish the
blazes, and stormy weather then further complicated the search and rescue.
Tragically, Chesed Shel Emes teams were on hand at the site as well to ensure the proper kavod hameis
of victims.
The cause
The current focus of the emergency response teams at the disaster site is, of course, the survivors.
However, experts are beginning to investigate as to the cause of the disaster. Surfside Mayor Charles
Burkett and other deputies have been updating the families and crowd of reporters consistently in the
days following the collapse.
An engineer who watched footage of the 12-second disaster says that various signs indicate that the
collapse began at the base of the structure. A 2018 engineering report on the building indicated deep
structural problems within the building. Specifically, the report noted “deep cracking” in the structure’s
columns and beams.
The Surfside Complex is located very close to the ocean. Some experts suggest that ocean saltwater
hastened the building’s deterioration. Further analysis will determine whether the collapse was indeed
caused by structural issues.
The victims
The population in the complex was largely South American and Jewish. As of this writing, 11 bodies have
been removed from the rubble and 150 are still unaccounted for. Six days after the tragedy, families of
the missing are growing increasingly anxious regarding the safety of their loved ones
The victims who lost their lives in this awful disaster are: Marcus Joseph Guara, 52; Frank Kleiman, 55;
Michael Davis Altman, 50; Leon Oliwkowicz, 80; Luis Bermudez, 26; Anna Ortiz, 46; Christina Beatriz
Elvir, 74;Stacie Dawn Fang, 54; Antonio Lozano, 83; Gladys Lozano, 79; and Manuel “Manny” LaFont,

A Miraculous Escape
Survivors say they woke up at around 1:30 a.m. Thursday morning to fire alarms ringing, tremendous
shaking throughout the building, and debris falling from above. Sora Nir is a frum mother of six who
survived the collapse. She told reporters how she returned home to the Surfside building from a Chabad
event at about midnight and heard frightening creaking noises in the building. As the noises increased,
she complained to the security guard in the building, who promised to check it out. Uneasily, Sora turned
to her apartment when she spotted debris falling into the parking garage. She gathered her two children
who were with her that night and screaming, they fled the building just in time to watch it collapse.
Sora reported running through empty streets as the dust from the collapse engulfed her family. They were
finally assisted by an Israeli man who helped them book a hotel room, just as the Red Cross got involved
and began paying for lodging for survivors.