Turn Up The Volume 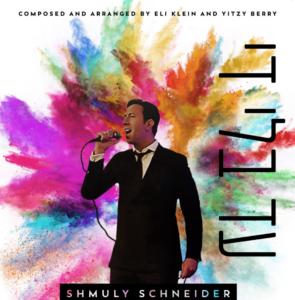 Shmuly Schneider’s latest single is hitting in time for Purim

The Jewish music scene is teeming with talented artists and outstanding compositions. It’s nearly impossible for a newcomer’s voice to be heard above the din.

But Shmuly Schneider is in another league.

The vibrant singer brings a unique sound to the chorus of Jewish performers. With his rich, warm voice and genuine flavor, Shmuly aims for a heimish sound more reminiscent of MBD’s and Avraham Fried’s timeless style than today’s pop and super-digitized music. Shmuly’s songs are hartzig yet upbeat, uplifting yet catchy, creating the perfect blend of wholesome Jewish music with an energetic, contemporary sound.

He’s just recently hit the scene, but the Brooklyn-raised yungerman has already earned a name for himself as a gifted singer with a voice that can inspire a crowd of hundreds and pull a room full of wedding guests out of their chairs and onto the dance floor.

For Shmuly, music is more than just a job, it’s a passion.

The dynamic singer was raised in a home that was alive with music, and he was singing intricate harmonies at the Shabbos table from a young age.

“I come from a very musical family baruch Hashem,” he relates. “My father can hear a new song and then pick up any instrument and play it well.”

As a child, Shmuly learned to play several instruments and always had a keen interest in all styles of Jewish music. He’s also been blessed with an incredibly attuned musical ear—he would hear a symphonic arrangement and pick apart every instrument that it was comprised of.

When Shmuly’s friends started getting married, he began receiving requests from chassanim to sing at their weddings. He graciously accepted, bringing his trademark energy and heartfelt singing to every chasunah. His stunning performances did not go unnoticed, and word spread quickly. Pretty soon, Shmuly Schneider had joined the ranks of talented vocalists.

Today, Shmuly has made his mark as a talented wedding singer who brings his own touch to each event.His hartzig singing has enhanced dozens of chuppahs,and his energetic vibe has brought the dancing at weddings and other events to a whole new level.

Famed shadchan Shuey “Pomy” Pomerantz recently hired Shmuly to sing at one of his simchos,and he was thrilled with the results. “Stunning voice,” he says of Shmuly. “He was energetic, entertaining, and such a pleasure to work with. A real star!”

Soon after, Shmuly established a men’s choir which would perform at Shabbos events and simchos.The choir offers clients of discerning taste a beautiful sound to enhance their Shabbos.

“People love the warmth we bring, our harmonies, and our energy, and we’re thrilled to create the atmosphere they need at their Shabbos event through our singing.”

Shmuly and his choir excel at connecting with every crowd and sing a wide variety of songs in any style, from Dveykus and Abish Brodt to contemporary hits and popular chassidish niggunim. Although Shmuly chooses not to market the choir, his name speaks for itself. The group has recently performed at several large events, including a Shabbos for Torah Umesorah in Chicago, Simchas Torah at Lutzk, and various hotel programs.

Throughout this time, Shmuly was busy recording and releasing singles and music videos, each of which was wildly popular among fans.

The powerhouse singer has been composing songs of his own since his yeshivah days. Many of his first official releases were covers since he enjoys adapting songs with his own unique style and putting a fresh spin on the compositions with new lyrics, bridges, arrangements, and more.

His first single, Hisyatzivu,is an original composition that he composed. The heartfelt song of chizuk reminds the listener to hold onto their emunah and bitachon and thank Hashemeven when times are rough, as the yeshuah is sure to come soon. The song was well received and inspired thousands to keep believing through life’s greatest challenges.

The next song Shmuly produced was Chasoif—We Need Your Light,a cover of Beri Weber’s popular Riboin fit to the words of Chasoif Zero’a Kodshecha.The song was released for Chanukah, as the words fit perfectly with the theme of this Yom Tov.

“Many people shared that they’d sat in front of their menorah and listened to Chasoif over and over again,” he says. “They drew inspiration from the song, and it enhanced their Chanukah.”

The next single, released in time for last Purim, was Zoche,a freshly spun cover of the MBD classic “Kol Hamesame’ach.”Shmuly brought the song to Eli Klein and Yitzy Berry, the dynamic duo in Eretz Yisrael, and had them redo the arrangements, update the sound, and turn the song into a fast-beat, fun dance track. Thanks to this viral cover, the song from the ’90s was revived and has returned to the wedding circuit.

Vehi She’amdah,sung to the tune of “Vaymen”from Shimmy Engel, is a haunting niggun that was released in time for Pesach last year. Shmuly added a bridge with English lyrics to help listeners connect to the meaning behind the timeless words of V’hi She’amdah.

This past summer, Shmuly wrote Special Hearts for Camp SCHI. The song is a stunning composition that speaks for special children, thanking their parents and tireless caregivers for all they do. For the children who may have limited communication skills, this song is their voice, telling their story straight from their special hearts. After Shmuly performed Special Hearts at Camp SCHI, it became a beloved favorite that holds a place in so many people’s hearts.

In Elul, Shmuly released Ulay from Rechnitz’s Shir album as a music video set in a shul. The beautiful cover, sung to the original words from Selichos and produced during a time of year when peopleare yearning to connect and grow, was widely popular and left fans begging for more.

And now, finally, the wait is over.

Just in time for Purim 2022 comes a brand-new song composed and arranged by Eli Klein and Yitzy Berry. “While working on Zoche with Shmuly, we spotted right away something unique and special in his voice. And so, we were very excited to be able to compose this new song for him,” says Yitzy.

The inspiration for this song comes from the pasuk “B’chol ha’makom asher azkir es Shemi, avo eilecha u’veirachticha.”Shmuly came across this pasuk while being ma’avir sedra for Parshas Yisro.

“The words just jumped out at me!” he enthuses. “I knew I needed a song with these words.”

The Ba’al Haturimnotes that the gematria of “avo” is 10, Shmuly explains. Hashem is telling us that when we gather in shul with a minyan for davening and learning, He will come and bentch us ad bli dai—to no end.

“It’s such a beautiful, powerful concept!”

Shmuly sings the song with a chassidish havarah, a practice he says is very common in today’s interconnected Jewish music industry, where you have Israeli hits sung by American singers, sefardim singing with chassidim,andevery group borrowing songs, styles, and pronunciations from others.

“Music is the great unifier, the thread that bonds us all together,” he says. “And especially now, before Purim, when Haman sought to destroy us because he knew we were so spread among the nations, we need to join together, to show that we are one, that we are always b’achdus.And one way we can do that is by singing together.”

Ad Bli Dai is a foot-tapping, steering-wheel-drumming, dance-floor-throbbing song that will lift you higher and make your day brighter, just in time for Purim.

Shmuly Schneider’s brand-new single, available now on Mostly Music, is the song you’ll soon be hearing blasted at weddings, on the radio, at Purim parties, and all over town. It’s the song that will bridge the gap between yesterday’s nostalgic sound and today’s fresh vibe.

Download Ad Bli Dai and let the unique sound of Shmuly Schneider speak for itself!