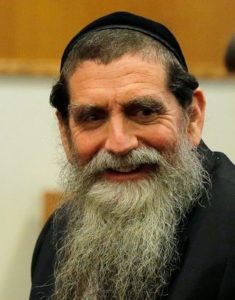 In a tremendous victory for SCHI founder Rabbi Osher Eisemann, b’chasdei Hashem Superior Court Judge Joseph Paone on Tuesday granted his motion for a new trial, vacating the result of a 2019 trial in which a jury found Rabbi Eisemann guilty on two out of nine charges brought by state prosecutors.

First, a little background. Rabbi Osher Eisemann founded the School for Children with Hidden Intelligence (SCHI) in 1995 after identifying a desperate need in the Lakewood community for a school catering to children who suffer from developmental and emotional delays, as well as certain medical challenges. Through his blood, sweat, and tears—and a lot of siyata d’Shmaya—SCHI, over the years, has become the gold standard in schooling for special-needs children.

Nine months after raids at SCHI and the Eisemann residence in 2016, Rabbi Eisemann was charged with various financial crimes and ordered to stand trial.

At his trial, held in 2019, Rabbi Eisemann faced nine charges and was acquitted on seven of them, with the jury finding him guilty of just two—money laundering and misconduct by a corporate official. The guilty verdicts came from the state’s allegation that Rabbi Eisemann removed $200,000 from SCHI’s bank account to write down a debt he allegedly owed to Services for Hidden Intelligence, SCHI’s nonprofit fundraising organization. We’ll get back to this soon.

At sentencing, Superior Court Judge Benjamin Bucca noted the selfless work to which Rabbi Eisemann has dedicated his life and gave him a relatively lenient sentence: 60 days in jail. The prosecution appealed the ruling and won, with a panel of appellate judges ordering a new judge to resentence Rabbi Eisemann. The defense then appealed the two guilty verdicts but was rejected by a higher court and ordered to continue to the resentencing phase.

During the wait for a resentencing date, defense attorney Lee Vartan interviewed a former SCHI bookkeeper, who stated in a certification that the entire issue was the result of a simple accounting error she had made in 2015 and was in no way evidence of any wrongdoing by Rabbi Eisemann; in fact, the loan that prosecutors insisted showed evidence of wrongdoing never existed.

The bookkeeper stated that she erroneously entered the $200,000 credit on SCHI’s QuickBooks loan account in order to balance the books—not to write down a loan. The bookkeeper added that Rabbi Eisemann wasn’t even aware of the QuickBooks entry she had made until he was suddenly charged with crimes.

At a hearing last Friday before Middlesex County Superior Court Judge Joseph Paone, Vartan used this explosive new evidence to deliver an impassioned yet concise dismemberment of both the prosecution’s case and their conduct. Vartan made a compelling argument that the new evidence clears Rabbi Eisemann of any guilt, and showed that the prosecution knew all along that the bookkeeper had made the QuickBooks entry in question, yet chose to hide that information from both the defense and jury—a stunningly brazen violation of the Brady Act.

In fact, Vartan asserted that years of state audits show that not only did Rabbi Eisemann never owe SCHI money, but in fact it owes him money! Vartan maintained that the evidence shows that the state’s entire case was hinged on a blatant misinterpretation of the QuickBooks entry by a state investigator who had no understanding of what he was looking at.

“This is wholly exonerating evidence,” Vartan said. “The evidence that we have brought to bear before the court shows that Osher Eisemann is innocent.”

At the hearing’s closing, Judge Paone made clear that his decision on the motion for a retrial would come down to the bookkeeper’s testimony.

“If there’s no evidence a loan was outstanding, then that enhances the suggestion by [the bookkeeper] that there was a mistake,” Paone said.

After several days of considering the arguments of both Rabbi Eisemann’s attorneys and the prosecution’s rebuttal of it, Judge Paone determined that the defense’s argument passed the so-called Carter test, a three-pronged benchmark for measuring if new evidence warrants a new trial. Additionally, he determined that had the new evidence not been hidden by prosecutors in the 2019 trial, the jury would have found him not guilty.

“It does more than merely contradict the evidence adduced at trial; it goes to the central issue of defendant’s guilt and has the probable effect of exonerating the defendant,” Judge Paone wrote in his 10-page ruling. “In the most literal sense… there can be no doubt that if [the bookkeeper] is believed by a jury, the verdict will be different.”

The judge also noted that although there was no concrete evidence that the prosecution had willfully hidden key evidence, nefarious intentions are not required to warrant a new trial.

A joyous celebration was held at the Eisemann home on Tuesday night, with hundreds converging at the Monmouth Avenue residence to bask and join in the family’s jubilance over the positive development.

But despite the cause for joy, additional tefillos are needed for Rabbi Eisemann as the prosecution plots its next steps. If the prosecution decides to continue their battle, they essentially have two paths forward. They can appeal Judge Paone’s granted motion, though this carries with it a significant level of peril for them. Judge Paone granted the motion because of not one, but two reasons—the new evidence having come to light and the prosecution’s violation of the Brady Act. Overcoming both of these obstacles could be a hill too high for the prosecution to overcome on appeal.

The other option prosecutors have is to go forward with a new trial. Judge Paone has already set a court date on August 9—two days after Tishah B’av—to discuss procedures relating to a new trial, in the event the prosecution chooses to take this route. A brand-new trial would see Rabbi Eisemann faced with the two charges he was originally convicted on; the prosecution may not retry him for the charges he was cleared of in the 2019 trial, as that would constitute double-jeopardy. A new trial would include the new evidence presented by the defense team, giving Rabbi Eisemann a much greater ability to convince a new jury of his innocence and deserved freedom.

Please continue to daven for Osher ben Chana Frumet until his yeshuah is complete.