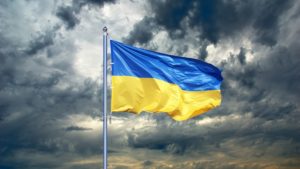 Shattering nearly 75 years of peace on the historically war-torn European continent, Russian forces invaded neighboring Ukraine last week, plunging the region into a bloody conflict that threatens to spill over to other countries. This unique, globally dangerous moment in history is underlined in red by the nuclear arsenal held by an unpredictable and aggressive leader, and his threats to use it.

But the war in Ukraine has proven to be a unifying moment for the rest of the world, with almost unanimous international condemnation of Russian aggression. The community of nations has moved nearly as one to isolate Russia and cut off its economy, and to show support to the victim, Ukraine.

The violence has spawned a burgeoning refugee crisis, as millions are fleeing the war zone into neighboring countries. Jewish activists in the US, Europe, and Israel are working to evacuate and rescue as many Ukrainian Jews as possible.

Tides of war: not quite as Putin planned

The ebb and flow of war and its fortunes are constantly changing; the following is current as of this writing.

Russian forces have faced unexpected difficulty executing their declared “special military operation” against Ukraine. Defending forces have held key cities longer than expected, stymied Russian attempts to establish air supremacy, and damaged struggling supply lines. The Russian military does not have a firm grip on any major Ukrainian city, but have the capital, Kyiv, surrounded and under siege.

Ukraine has mobilized its citizenry to fight ferociously. Six days into the fighting, its ground-to-air defenses are still operational,. Ukraine’s armed forces released a tally of Russian losses early Monday, and they include over 5,300 Russian casualties (dead and wounded), 50 aircraft, 200 tanks, 820 armored vehicles, and even two ships. “It is nothing short of remarkable what the Ukrainian military has accomplished,” said US Army Gen. Jack Keane, but noted that the Russian advantage is still considerable.

The slowed Russian momentum forced President Vladimir Putin to commit more forces to the fight than analysts think he had planned, with over 75 percent of the force amassed at the border moved inside the country by Monday. US military analysts expect Russian commanders to return to their traditional model of “blunt” warfare tactics, with much more destruction and loss of life, after the failure of the initial precision approach. A convoy of Russian vehicles stretching over 40 miles is slowly approaching Kyiv, a key Russian objective. Ukrainian forces have been trying to destroy bridges to slow the advance of the convoy.

Belarus, the only ally to stick by Russia’s side, has indicated it may enter the fray. Belorussian military hardware has been seen moving near the border with Ukraine. NATO countries, including the United States and even Germany, continue to supply the Ukrainian defenders with ammunition and technology but have not committed troops to the fight.

Talking the talk: the strategy of negotiations

Russian President Putin offered to negotiate toward a ceasefire Friday. Analysts see that as a tactical move; with his fist around the Ukrainian neck, Putin was happy to offer “negotiations” in which he intended to compromise nothing. At best, he would achieve all his demands; at worst, he would cast the West as the warmongers and sacrificers of Ukrainian lives. But Putin’s bargaining position was drastically damaged by the fates of war. The dictator may be seeking a way to save face, but none is readily available. Instead, Putin was forced to up the ante—rattling the nuclear saber at his enemies. On Sunday, he placed his “deterrence” forces on high alert, meaning Russian tactical (small) nuclear weapons were made ready to fire.

Ukrainian and Russian delegations met Monday morning at the Belorussian border. The sides “found some common ground,” but agreed on nothing substantive, and bombardment of Kyiv intensified following the talks. Additional talks were planned for later in the week.

Alone against the world

Almost all world powers have united in support of Ukraine, and have taken steps to isolate and punish Russia. The United Nations held an emergency meeting of the General Assembly on Monday, the first in its history. US and European Union (EU) officials cut off Russian banks, companies, and oligarchs from the world economy, freezing all assets held by Russia or Russian supporters, including the Central Bank of Russia. The EU closed its airspace to all Russian traffic, and cut off Russia from the SWIFT network, the primary system for communicating international bank transfers. Privately held major corporations around the world cut off all business ties with the Kremlin, cancelling all contracts.

The value of the ruble crashed precipitously on Monday, losing 30 percent of its value and becoming worth less than a US penny by day’s end. Russian citizens have been making a run on banks, trying to withdraw valuables before it is too late. Putin signed a decree banning foreign currency, and raised interest rates to 20 percent, in a bid to shore up the tanking ruble. S&P graded Russian credit as “junk.” World markets also suffered Monday, but most US markets remained relatively stable.

In the US, Russian goods were taken off shelves and boycotted. Liquor stores and bars made a show of pouring Russian-made vodka into street sewers, replacing it with Ukrainian vodka.

Even traditionally neutral Sweden and Switzerland took steps to isolate and condemn Russia. Only Belarus continues to support it ally, and China neutrally called for both sides to calm down. US state department officials shut its embassy in Belarus and expelled Russian diplomats from Washington. It has called for all Americans to leave Russia while they still can.

The underworld has also unified against Putin. The collective of computer hackers known as Anonymous declared war against Russia and made its first strike on Monday. The group hacked into Russian news websites and published a message urging Russians to resist the war effort.

Protests against the war have sparked across the Russian homeland, but have been dealt with harshly by police. Over 300 protesters were swiftly arrested in the initial two days of the fighting. Across the world, protests against the war have been held in front of Russian embassies in most major cities. Approximately 100,000 people turned out in Berlin to protest Russia’s invasion and show solidarity with the Ukrainian people.

International political analysts agree on one thing: they have no idea what President Putin’s strategy is or what he will do next.

In his speeches before and during the fighting, Putin made it clear that his objectives are actually only loosely related to NATO, and are rooted in traditional Russian phobia of the West. It’s clear that Putin dreams of restoring the Soviet-era empire and world influence. In hindsight, a pattern has emerged over the past 20 years. Putin’s incursion into Georgia in 2008, Crimea in 2014, and forces still committed in Kazakhstan are part of his vision of Russian world dominance.

Former US secretary of state Condoleezza Rice and a growing list of officials have gone on record questioning Putin’s mental state. “I met with him many times, and this is a different Putin,” Rice said. “He was always calculating and cold, but this is different. He seems erratic. There is an ever deepening, delusional rendering of history.”

Will Putin use his nuclear weapons? Swiss officials have announced that an investigation they have conducted shows that it is unlikely he will do so. Ukrainian officials are accusing Russian forces of war crimes, including targeting civilian buildings with missile strikes and dressing their soldiers in Ukrainian uniforms. A cluster bomb hit a kindergarten in Kiev, causing child casualties. The International Criminal Court in The Hague has promised a full investigation.

Why did Putin choose to strike now? Lakewood’s Rep. Chris Smith and other Republicans are pointing an accusing finger at the failed US withdrawal from Afghanistan. “Regrettably, President Biden’s disastrous withdrawal from Afghanistan—and abandonment of fellow Americans and US allies behind enemy lines—likely empowered Putin and other brutal dictators by sending the message to all of America’s enemies that they could pursue such aggression without significant pushback from the Biden administration,” said Smith, a senior member of the House Foreign Affairs committee.

Racing for the border

The outbreak of war sent millions of Ukrainians running for the western border. Over a million people have already left, and the UN is expecting millions more to cross into Poland, Moldova, and Hungary in the coming days. Bottlenecks of thousands of vehicles stretch for miles at the approaches to border crossings. Many people, mostly women and children, have abandoned vehicles and are walking to the border.

Over 200,000 Jews resided in Ukraine at the beginning of the conflict, many in the two largest cities of Kyiv and Kharkov. A convoy of four buses, including many frum Yidden, headed for the Polish border on Shabbos, stopping along the way to daven Kabbalas Shabbos and make Kiddush. The Israeli diplomatic mission has been evacuated to the eastern city of Lvov. Israel sent 100 tons of humanitarian aid to assist civilians, including medical equipment and medicine, tents, sleeping bags and blankets.

Rabbanim in Poland, Hungary, and Odessa are working to get as many out of harm’s way as possible. The situation is precarious, as Ukraine has imposed martial law on the country, meaning able-bodied men between the ages of 18 and 60 are forbidden from leaving and must go fight the invaders. Agudas Yisrael has set up a fund to support the evacuation efforts, and theMoetzes Gedolei Torah released a letter urging all to recite tehillim for our brothers in the war zone and to contribute to the fund. You can donate at agudah.org/Ukraine or by calling 917-795-4414.