Where are our children? 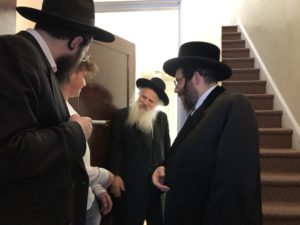 Where is Yanky? Where is Chany?

Lakewood Unites to Bring Every Child Under the Wings of Shabbos

The aromas of chicken soup and cholent waft from the Friedmans’ kitchen. The home is spic and span, with the finest tablecloth and cutlery bedecking the table. Father prepares the neiros. Mother gets ready to light. The boys are being ma’avir sedrah in the study. The girls are touching up their hair and making sure their favorite foods are on the blech.

The scene of kabbalas Shabbos in a Torah home is one that defies description. It is a beautiful sight with a distinctly uplifting aura. Although it takes place week after week, its magic is somehow never lost.

Unfortunately, at the Cohens’*, the scene is somewhat different.

Totty, Mommy, and the kids are scurrying to make the last-minute preparations. The table looks beautiful and the aroma is sweet. But Yanky*…Yanky is not dressed in Shabbos clothes. Yanky is not learning. Yanky is not helping. Yanky is not going to shul. Yanky won’t be there for the seudah. Once again, Mommy lovingly sets a table setting for Yanky, hoping that perhaps this week will be different… But it will remain empty, the gaping void giving another stab to her heart with every glance. Yanky’s siblings will once again eagerly sing their favorite Shabbos songs and review their parshah sheets, but Yanky’s voice will be missing. As loud as the Cohen Shabbos seudah may get, the silence will be deafening.

Unfortunately, for Yanky, Shabbos is just another day, called Saturday. It’s a day to work or go out with friends, drive, and use every gadget under the sun.

Mommy’s heart aches as she cries and davens, “V’zakeini legadel banim u’vnei banim… Hashem, this is my yearning for every one of my children… When will we see that day?”

Mommy’s pain is shared by every member of the family—including Yanky.

Behind closed doors, Yanky is in pain. He is so distant from the gift of his forefathers, but deep down, he wishes he can come closer and enjoy what his family and old friends are enjoying. He is torn. He wants to experience the warmth and beauty of Shabbos once again and bask in its joy and spiritual fulfillment. But there’s a stubborn barrier…

Unfortunately, even in our beautiful kehillah, Yanky Cohen’s story is not unique.

Can we bring them back?

Baruch Hashem, the Lakewood-area kehillah is blessed with tens of thousands of boys and girls who proudly and enthusiastically carry the torch of Torah and mitzvos.

The percentage of local bachurim and girls who are not properly shomer Shabbos is very small. But in a kehillah of this size, even a very small percentage translates into a painfully large number of teenagers, estimated at some 150 boys and girls. That is 150 neshamos—each neshamah an invaluable gem. Needless to say, the sight of bnei and bnos Yisrael being mechallel Shabbos on the streets R”l mars the kedushas Shabbos of our entire kehillah. It is particularly damaging for the teenagers’ parents and siblings, as well as friends whose tenuous commitment to Shabbos can get weakened.

The Chafetz Chaim zt”l once traveled to a town where he witnessed chillul Shabbos b’farhesia. During his second Shabbos in that town, he cried even more than he had cried the first Shabbos. “I am crying because after seeing chillul Shabbos last week, I was no longer as pained as when I saw it the first time,” he explained.

Can we allow this to remain a reality anywhere in our kehillah?

This plight is too much to bear. And it is difficult for the struggling souls as well. In the words of one veteran in the Lakewood “at-risk” field, “Over all the years, I have almost never met a struggling boy or girl whose end goal was not to be shomer Shabbos. They want to do the right thing. We just need to help them do it in a way that works for them.”

To this end, the Rosh Yeshivah Rav Dovid Schustal shlit”a and the Skulener Rebbe shlit”a have made it their personal mission to launch a special “Shabbos project” to bring these beloved neshamos closer to Shabbos Hamalkah. The Rosh Yeshivah and the Rebbe have dedicated hours of their time during these precious days of Selichos and Aseres Yemei Teshuvah to ensure the success of their holy mission. Tzom Gedalyah found both the Rosh Yeshivah and the Rebbe closeted in their studies calling rav after rav and urging each of them to dedicate a portion of his Shabbos Shuvah drashah to implore every individual in his kehillah to support this urgent project. These gedolim are assisted by the chashuve rabbanim Rav Zalman Sorotzkin shlit”a of Lutzk, Rav Avrohom Birnbaum shlit”a, R”M in Beth Medrash Govoha, and Rav Chaim Meir Roth shlit”a of Khal Sterling Forest-Sefard.

The Shabbos Project aims to enable struggling teenagers to enjoy a suitable Shabbos experience by providing a steady schedule of Shabbaton programs.

The idea of a Shabbaton for struggling teens is not new. In fact, it has been tried on numerous occasions by askanim in the field. And it worked.

The teens came willingly, turned in their gadgets before the zman, and enjoyed seudos, davening, workshops, kumzitzes, and other activities through Motza’ei Shabbos. At the end of each Shabbaton, many participants expressed eagerness to come again. Furthermore, many undertook solid kabbalos to keep some aspects, or even all of, shemiras Shabbos for the long term. But even those who did not commit to enhanced observance gained tremendously from the experience.

Unfortunately, due to a lack of funding, these Shabbatons could only be arranged on a very limited basis. Meanwhile, many of these precious children are drifting further away…

With the help of our kehillah, the Shabbos Project will b’ezras Hashem change the name of the game. The project aims to arrange a steady schedule of Shabbatons, with a minimum of one Shabbaton each month for boys and one for girls. They will provide enjoyable and uplifting programs at various venues, alternating between in town and out of town.

It will cost just around $360,000 to fund this project for an entire year—a very reachable figure. Hopefully, the success of these Shabbatons will bring additional successes and additional projects, further enhancing shemiras Shabbos.

The famed gaon Rav Yaakov Ettlinger zt”l wrote in Sefer Minchas Ani that the honor of Shabbos is extra important in a year such as this, when we did not blow the shofar on the first day of Rosh Hashanah. We lost the protection of the shofar due to a gezeirah that was put in place to prevent chillul Shabbos. If we afford Shabbos its proper honor, the power of Shabbos will protect us all year instead. In fact, the Minchas Ani explains that some of Klal Yisrael’s best years in history were years such as this one, and this was the result of the nation’s strength in keeping Shabbos.

Now, during the Aseres Yemei Teshuvah, the Lakewood-area community is uniting on behalf of Shabbos, on behalf of our precious children, and on behalf of our beautiful kehillah to successfully establish the Shabbos Project for the coming year. Appeals will be held in local shuls, among other outreach efforts to raise the necessary funds.

In this zechus, may we merit a gmar chasimah tovah, and may every parent see nachas d’kedusha from their offspring.Please mail a generous donation in the enclosed self-addressed envelope. Checks are payable to “Shabbos.” Donations can also be made via the donation hotline at 8482451020 or by visiting https://thechesedfund.com/shabbos/. All donations are tax deductible. Tizku l’mitzvos!