A Time To Sell 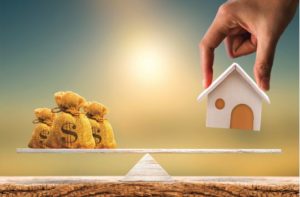 Cashing Out of a Real Estate Investment

This decision was a big one for Shimon Shamah. Years ago, he and his wife had used their wedding gift money to purchase a house as an investment. At first, the rent had barely covered the expenses, but over time, the property had produced a bit of cash flow. Now, a decade later, with the area greatly improved, home prices had shot up. Real estate agents were calling him, encouraging him to take advantage of the sellers’ market. He’d be able to lock in a handsome gain, and the buying frenzy was an opportunity not to be missed, they said. Was it time to sell?

The real estate market has been booming. Obviously, the best time to sell anything is when there’s great demand and limited supply. But investors need to take a look at the bigger picture. Locking in a gain may seem wise, but what then? Will Shimon be able to reinvest the money profitably? By selling, the shoe will be on the other foot—he now needs to be a buyer of his next investment—and it’s a terrible time to be a buyer! There’s often no advantage to selling at an inflated price just to buy something else at an equally inflated price.

If Shimon won’t be able to find a good new investment, the sale proceeds will sit in the bank, earning nothing. That may yield a lower return than just riding the boom while collecting rising rent. This is especially true after you consider fees and taxes. A major transaction like selling property tends to carry major fees, such as the price of fixing up odds and ends to suit potential buyers, realtor commissions, and legal charges. And of course, Uncle Sam wants his share too. There may well be realty transfer taxes payable to the state and also taxes on the profit. Then there will be new costs associated with the intended purchase.

Selling an appreciated asset can make perfect sense, but if taxes and fees eat up a large chunk of the proceeds, the euphoria of receiving a previously unimaginable sale price fades quickly. And swapping one property for another can lead to other complications too. One thing people often overlook is the potential loss of government assistance eligibility. Buying a property that will produce steady dividends may cause the loss of an even greater sum from Uncle Sam.

How investment profits are structured and timed can make a huge difference with regard to tax liabilities and government programs. The paper gain of a house rising in value doesn’t count taxwise for the most part, but ongoing investment income does (though depreciation can help with this to some extent). And while eligibility for government programs shouldn’t run one’s entire financial life, it often matters greatly to a family budget. Often, the simplest way to maximize net investment profit without jeopardizing vital social assistance is simply letting the valuation rise without cashing out. Swapping guaranteed government assistance in the pursuit of uncertain greater investment gain is an iffy proposition.

Selling just to capture a high price or more cash flow (versus price growth) is often not worthwhile. The goal should be to reinvest the proceeds into an investment with significantly greater potential. Perhaps Shimon can identify an up-and-coming area that may be relatively inexpensive or find a house that needs some cosmetic work. Swapping an investment that has reached most of its potential for one that hasn’t can be a home run. There will be some added costs and risks, but it should pay off handsomely. (Some do this with their primary home, buying in a less established area and selling after prices skyrocket. The profit pays for their children’s weddings.)

Another path to consider is refinancing to extract profits from an appreciated investment. The cash can then be reinvested elsewhere with minimal cost or effect on taxes and programs. It’s important to consider the added risks of maintaining a (larger) mortgage. But refinancing is often the cash-out of choice for professional real estate investors—many will keep their buildings for decades, refinancing as prices rise and mortgage balances fall. This path has its risks but can work out very well for the novice too.

Like most financial questions, the answer to “Is it time to sell?”  starts with “It depends.” It’s not a black-and-white issue. But what is applicable across the board is the need to research and consider it carefully. Many people, especially those in kollel, are not accustomed to weighing multifaceted financial questions. When these conundrums arise, it’s worthwhile to take the time to research the issue in detail. Ask a lot of questions. Run a lot of numbers. Think about various angles. B’ezras Hashem, the decision will then work for the best.

Just by the way: A big improvement in EITC eligibility

Although some yungerleit are not financially proficient, there are many that are extremely so. In the course of my writing and conversing about Lakewood’s financial issues, I have corresponded with many super-savvy kolleleit. They often can’t afford professional advisers and so make sure to self-educate about matters that impact their finances and ability to stay in klei kodesh long-term.

One such fellow alerted me that the limit for investment income eligibility under the earned income tax credit rules has been raised drastically for 2021. Going forward, someone who is otherwise eligible for the credits may earn as much as $10,000 annually in “unearned income” versus just $3,650 in 2020. This fact is very relevant for investment planning to those in lower-income brackets. Clearly, there is plenty of valuable information to be gained bein hasedarim in in the coffee room! Plan accordingly.