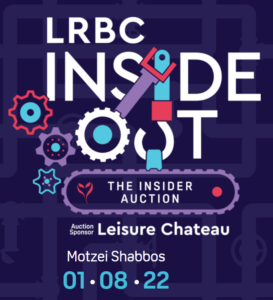 Insider Information on the Insider Auction

Behind every seamless operation are levers being strategically pulled, dials being subtly spun, and engines being revved into action. It’s a constant hum of activity and a perfect synchrony of people, roles, and systems.

Of course, it takes a community like ours to fuel an operation like that. Because behind every medical journey is LRBC, and behind LRBC is you.

Back in 1994, Lev Rochel Bikur Cholim began as the proverbial child of necessity, as an attempt to fill an obvious void with the fortitude of several unstoppable individuals and the endorsement of noted leaders.

Their credo was simple yet profound: We are here for the cholim. Whatever it takes.

But it quickly grew beyond its self-definition, evolving into a mammoth operation of national—and sometimes international—proportions.

And slowly, with the community ardently lined up behind it, Lev Rochel Bikur Cholim became not merely a household name, but a household wonder.

With its dedicated team of 24 staff members and over 200 volunteers, LRBC fields approximately 550 calls a day and services callers through five immense departments and six fully stocked guest houses. It combines the big things—equipment, food, transportation, hospitality, accommodations—with the little things: a midnight check-in visit, a patient’s favorite food, a care package on a hard day.

“That fateful Friday changed it all,” Sarah recalls. “After a nasty fall, my baby’s head trauma seemed minor at first; he was weak and pale, but our pediatrician assured us that the impact would fade and he’d be good as new.

“I wanted to believe him. I doggedly went about my Shabbos errands whispering reassurances in my baby’s ear: ‘You’ll be okay. That was just a scare. Shabbos will bring rest and relief.’”

But his sudden violent vomiting and other alarming symptoms shattered their fragile equanimity. And just like that, her baby went from gurgling infant to critical patient in just a few moments.

“We braced ourselves for the long haul. But how does a family settle in on foreign hospital soil?”

In the confines of a medical center where clocks have no authority and comfort is disregarded in the face of perpetual crisis, Sarah and her husband needed a lifeline.

Enter LRBC Friendship House, their home for the next few months. But it was more than just a home. It was a refueling station, a place to recoup their tenuous morale and recharge the strength they’d need so badly to keep going.

“The house was more comfortable than anything I could have envisioned,” Sarah says. “It was as welcoming as my own home, as well maintained as a five-star hotel, and as well stocked as a supermarket.”

They joined several other Jewish families, united in a common plight—and their gratitude for this haven.

But if a fully equipped home wasn’t impressive enough, the calls that came from the LRBC team were truly astounding. Are there any particular foods you and your husband enjoy? Is the temperature comfortable? What can we do to make your day easier today?

“As we alternated between Bikur Cholim’s expert advocacy in the hospital and the phenomenal warmth of the Friendship House, we were enveloped in a cocoon of caring. That caring revived our worn spirits and injected a modicum of stability in a very volatile circumstance.

“Our sojourn wasn’t over—not by a long shot. But at every juncture, we found a gem of LRBC kindness awaiting us. When I bentched lecht in the kosher-for-Pesach home with five kindred Jewish women. When I watched the ICU sliding doors open at midnight to reveal Rabbi Kaszirer bearing bags of fresh food. When an emergency transport to Columbia was made to look easy, thanks to hours of strategic string pulling.”

LRBC was there for Sarah—and for hundreds of desperate callers since.

When the elderly Solomons relocated from Baltimore to Lakewood, they didn’t imagine that illness, stress, and dread awaited them. But when Mrs. Solomon began to show worrying signs, they realized they had two choices: succumb to their fate—or call LRBC.

“When my wife began showing signs of weakness,” he recounts, “I was only moderately concerned.” But when even the seemingly unflappable Hatzolah members’ faces grew grave, the first prickle of fear set in.

The dreaded emergency room was a jungle of machinery, a bevy of too-busy nurses, and a place where he experienced the most profound sense of loneliness he’d ever had.

“Medical jargon has never been my forte,” Mr. Solomon admits. “But even I could figure out that the numbers weren’t good.”

They were there for the big things, the little things, and most impressively, the things the Solomons didn’t find out about until after the fact. Like one evening, when an LRBC angel made her nightly hospital rounds. Noticing something awry on Mrs. Solomon’s heart rate monitor, she summoned Cardiology and very narrowly avoided yet another crisis—while the couple slept peacefully.

Another time, it was the LRBC volunteer who noticed her critically low oxygen levels and put things in motion to get a trach inserted—with moments to spare.

As one of the myriad specialists that LRBC is connected with is wont to say, “We know our specialties. But at LRBC, they’re specialists in everything.”

“And that’s what people don’t always understand about LRBC,” Mr. Solomon concludes. “Yes, they are a huge operation. Yes, they have thousands of pieces of equipment, a comprehensive database, and dozens of volunteers. But when it comes to you, you’re not a number. You are a unique individual and get treated as such. No task is too great and no resource is out of reach for you.”

Rivkah, a passionate LRBC volunteer, shares an anecdote that made a profound impression on her. “Sometimes, it’s those small, behind-the-scenes deeds that make a bigger difference than we’d ever believe. That’s why we chose Inside Out as this year’s auction theme. We press the unmarked button. Pull the nondescript lever. Adjust the miniscule knob. And the outcome is so much greater than the sum of its parts.”

She’ll never forget the day she swung into the Robert Wood Johnson’s parking lot with a sense of purpose and a long to-do list. But before she even had a chance to park, Esther, a longtime LRBC patient, shuffled over to the car, mistakenly thinking that Rivkah was her transportation provider. She had already opened the back door and begun settling herself, leaving Rivkah with no recourse but to welcome her with a smile and say that of course, she’d be happy to drive her home.

Esther was undergoing difficult treatments which had unfortunate effects on her personality. And those effects made themselves known in all of her interactions.

Rivkah is a kind and altruistic volunteer. But even she found it difficult to remain cheerful in the face of the continuous onslaught of grievances.

It’s freezing. Now it’s boiling. Do you always have to take the longest route? I waited so long for you, and now this.

A litany of complaints drowned out the friendly voice of Rivkah’s Waze as it expertly guided her through the labyrinth of streets. The inevitable headache set in, but the accusations hurled from the back seat didn’t abate.

And then Rivkah has a watershed moment.

She’s an ill woman. What if this is her last trip? I need to treat her like a queen.

Finally, they reached their destination. Esther’s house was three flights up. Of course, Rivkah ran up ahead of her to open the door and turn on the heat. Of course, she came right back down to carry her packages up. Of course, she returned one last time to make sure she was settled comfortably. And of course, she did it all with grace and calm despite the glaring lack of gratitude from her passenger.

Imagine that this is her last trip. I had better treat her like a queen.

The case of mistaken identity had mushroomed into an ordeal that took the better part of Rivkah’s day.

“And then, just 48 hours later, LRBC received the crushing news,” Rivka recalls. “Esther had collapsed in her apartment and passed away. That trip had indeed turned out to be her last.”

The relatively small efforts of a determined volunteer created a lasting legacy of kindness that accompanied her not just on her short trip, but on her final journey.

One particularly poignant thank-you from Chaya, a patient of LRBC’s Soar pregnancy-loss program, tells us everything we need to know about its far-reaching impact.

“I’ve always considered my vivid imagination one of my greatest strengths,” she wrote.“And who spends more time with her vibrant dreams than an expectant mother? The future lay ahead like a rainbow in the sunshine: happy, magical, delightful. Parenthood! It was so near, I could almost touch it.”

Chaya described the icy fingers of dread—and then crushing reality. The hurtling descent from the pinnacle of hope to the abyss of anguish. And looming above that, the myriad technical details that were too painful to confront yet too urgent to ignore.

“With resolve born of desperation,” she shared, “I reached out to LRBC. And then, my job was done. With understanding and proficiency, they simply took over, giving me both the shoulder to cry on and the space to grieve.”

Despite the anguish of enduring surgery alone in a Covid-ridden hospital, she felt that everything would somehow, someway be alright. Her LRBC caseworker was there, providing both words of chizuk and expert advocacy.

“I wasn’t the postpartum mother I had envisioned being,” Chaya wrote. “But LRBC ensured that I’d feel as pampered as one. Along with a heartening chizuk packet came everything I could dream of to get my physical, emotional, and spiritual strength back. Thank you for being the speed-dial number that quickly became my lifeline.”

For the Sarahs, the Solomons, the Esthers, and the Chayas, LRBC is more than a lifeline. It is an operation that takes over at the most critical moments.

Pull a lever here. Upgrade a device there. Reboot functions on occasion.

How does LRBC keep going?

With spirit but not martyrdom, resilience but never denial.

Thank you for being an LRBC Insider. It’s your generosity that fuels its operation.

Don’t stay on the sidelines!

Join LRBC behind the scenes of its operation and enter to win fantastic prizes while supporting its efforts on behalf of the Lakewood community.

Handicap rides for the elderly and disabled to simchos and appointments

Food for families in crisis

Lakewood Friendship House—20 beds across from MMCS and LTAC