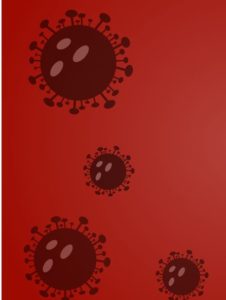 Fears that a new variant of the COVID-19 virus will spread rapidly across the globe have prompted reinstatement of travel restrictions, emergency declarations, and talk of new lockdowns. In New Jersey, measures to prevent the arrival of the variant are already stirring up trouble, but local governments are trying to avoid kicking in another round of restrictions. Internationally, the threat of a return to reduced movement has sent stocks tumbling and triggered a wave of market reactions.

Last week, South African scientists identified a new mutation of the coronavirus that they say is behind a steep spike in COVID-19 infections. The variant, named “omicron” after the fifteenth letter of the Greek alphabet, has been confirmed to be responsible for infections in Canada, Europe, Hong Kong, Israel and several southern African countries. As of this writing, epidemiologists have yet to confirm the presence of the virus in the United States, but health experts are assuming the virus is already here, waiting to be discovered.

South Africa saw the number of new daily cases explode from about 200 per day to 2,465, beginning Thursday. Struggling to explain the sudden rise in cases, scientists studied virus samples from the outbreak and discovered the new variant. In a statement on Friday, the World Health Organization (WHO) designated omicron as a “variant of concern,” with early data reported as being “troubling, but incomplete.”

The outbreak of the omicron variant in South Africa was like a “vertical line,” according to Dr. Eric Topol, vice president for research at Scripps Research in La Jolla, California. “We haven’t seen anything like that,” he said. “The line of slope is much higher than the initial delta line.” The variant has at least 50 mutations—when compared to other common variants—in its “spike protein,” the part of the microbe that attaches to cells and causes infection.

Lawrence Young, a virologist at the University of Warwick, described omicron as “the most heavily mutated version of the virus we have seen,” including several potentially worrying changes never before seen all in one strain of the virus.

There are three major areas of understanding necessary to gauge the danger of any new variant: Is it more transmissible; does it cause more severe disease; and is it more resistant to vaccine or recovery immunity than previous strains of the virus. It will take weeks to determine definite answers to these questions, but some indications already exist.

Omicron appears to be highly contagious, more so by many times than even the delta variant. Thus far, it has not triggered more severe illness. Vaccine makers say it is highly unlikely that the variant will make their vaccines useless, but assume may be “somewhat resistant.” The pharmaceutical companies say they can have an omicron-specific booster or vaccine ready within a few weeks.

Meanwhile, governments are taking no chances.

In the US, federal and state governments are on the lookout for the variant. On Friday, the US Centers for Disease Control and Prevention (CDC) said in a press release, “No cases of this variant have been identified in the US to date. The CDC is following the details of this new variant. [We are] continuously monitoring variants and the US variant surveillance system has reliably detected new variants in this country. We expect Omicron to be identified quickly, if it emerges in the US.”

“We have not detected it yet, but when you have a virus that is showing this degree of transmissibility and you’re having travel-related cases they’ve noted in other places already, when you have a virus like this, it almost invariably is going to go all over,” White House Chief Medical Advisor Dr. Anthony Fauci said. He added that talk of new lockdowns is “premature,” but he did not rule them out.

The United States, which lifted a pandemic-long travel ban from dozens of international countries including South Africa on November 8, reinstated the ban for foreign nationals from eight African countries on Monday. US citizens traveling from affected areas are still permitted to enter the country.

The CDC raised its COVID advisory to Level 4, its highest. This declares COVID risk to be “very high” and carries an “avoid travel” designation. The State Department, whose COVID-19 advisories generally parallel the CDC’s, also raised the country’s to level 4, which means “do not travel.”

Israel labeled 50 African states as red over the weekend and has banned all Israelis from traveling to them. It also blocked all foreigners from entering Israel for at least two weeks. Other countries around the world followed suit, especially in the European Union. EU Commission President Ursula von der Leyen said flights will have to “be suspended until we have a clear understanding about the danger posed by this new variant, and travelers returning from this region should respect strict quarantine rules.” Flights already in the air at the time the restrictions were enacted were held on landing strips until all passengers could be tested.

UN Secretary-General António Guterres condemned the countries, specifically Israel, for what it views as a discriminatory ban on travel from African countries. “I am now deeply concerned about the isolation of southern African countries due to new COVID-19 travel restrictions,” Guterres said in a statement. “The people of Africa cannot be blamed for the immorally low level of vaccinations available in Africa—and they should not be penalized for identifying and sharing crucial science and health information with the world.”

COVID-19 cases were already climbing in the many states when “omicron” became a household word. Plummeting temperatures and holiday travel season had forced many people into close quarters, triggering a new spike in COVID cases.

New York’s Governor Kathy Hochul declared a state of emergency late Friday amid the surge in COVID-19 cases and the looming threat of the new omicron variant. Hospitals in New York are again warning of being overrun with COVID patients as the state’s positivity rate hit 4.23 percent on Thursday, the highest since mid-April. In some regions, the rates were even higher: nearly 10 percent in western New York and almost nine percent in the Finger Lakes.

Hochul said the omicron variant has yet to be found in New York, but warned it is likely to arrive. By declaring a state of emergency, the state Department of Health will be allowed to limit non-essential, non-urgent procedures for hospitals or systems “with limited capacity to protect access to critical health care services.” Limited capacity will be “defined as below ten percent staffed-bed capacity, or as determined by the Department of Health based on regional and health care utilization factors.”

In New Jersey, Governor Phil Murphy has not signaled he will declare a new health emergency, although the current spike in metrics does allow him to enact new restrictions without such a declaration or approval from the legislature. The governor, who spent the weekend in Florida, tweeted out the state’s latest COVID metrics alongside a picture of himself getting his booster shot. He emphasized that the best way to combat omicron is to get vaccinated, or for the already vaccinated to “get boosted,” despite the variant’s likely resistance to the vaccines.

The latest data from the New Jersey Department of Health reports the current rate of transmission at 1.2, down slightly from 1.21, but still indicating an expansion of the outbreak. At least 882 people are hospitalized for COVID statewide and that number has remained above 800 for the last seven days. State health officials, before the emergence of omicron, predicted that the current surge in infections would land more than 2,000 people in the hospital by the end of January.

Several major events scheduled in New Jersey may be canceled. The Rutgers Center for Real Estate has postponed a major meeting. A spokesperson for the New Jersey Business & Industry Association said it was considering canceling in-person attendance at a public policy forum event scheduled for Tuesday. The Statewide Hispanic Chamber of Commerce of New Jersey said it is “monitoring the news” ahead of a gala planned for next week.

Although it will be weeks before data is available regarding how omicron may affect the effectiveness of current vaccines, Moderna has already announced a three-point strategy to combat the new variant. The strategies consist of three options for boosting COVID-19 vaccination, should the variant prove problematic.

The three options, according to a Friday release from the company, include increasing the dose of the booster; developing new inoculations currently in the works that are designed to “anticipate mutations such as those that have emerged in the omicron variant”; and creation of an omicron-specific booster, on which the company says it is already working.

Pfizer-BioNTech said it is studying the new variant and expects a targeted vaccine could be developed within six weeks, and be ready to be shipped within 100 days, if necessary. Johnson & Johnson is also testing its current vaccine against omicron.

Professor Andrew Pollard, director of the Oxford Vaccine Group, said he was cautiously optimistic existing COVID vaccines would be effective in preventing serious illness from the omicron variant, adding that mutations in omicron appear to be in similar regions as the mutations in other variants.

There may be a positive side to the new variant: the price of crude oil plummeted by about 13 percent in trading Friday, after word of the new variant surfaced, as companies feared new travel restrictions and lockdowns would depress fuel usage. The dropping price of crude should soon bring down gas prices at the pump.