The Farmers Need Us 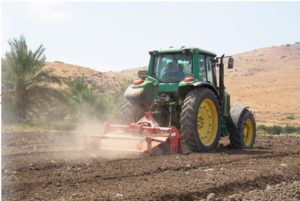 The Farmers Are Ready to Observe Shemittah

But They Need You to Make It Happen!

With just a couple of weeks to go before the onset of shemittah 5782, close to 4,000 farmers are preparing to allow their beloved land to lay fallow for a full year.

While shemittah comes once every seven years, something remarkable is occurring this year that has not happened in the past. Scores of farmers are asking to keep shemittah. They are coming on their own, with incredible resolve and determination, expressing a willingness to fulfill this difficult mitzvah in the most mehudar way. They are ready and willing. But they can’t do it without us!

Legendary klal activist Rabbi Shmuel Bloom, who has been involved in Keren Hashviis for over four decades, describes the unprecedented situation: “I’ve been involved in shemittah campaigns since 1979. Until this year, our work was primarily convincing farmers to keep shemittah. It was not easy. For a farmer to observe shemittah k’halachah, he has to have tremendous emunah; he has to be willing to give up his entire business for a full year. I would compare it to America of the early 20th century. People owned stores, and Shabbos was the busiest day of the week. They felt that they couldn’t close their stores on Shabbos; they thought it was pikuach nefesh. So, they would daven in the 7 a.m. minyan and then go to work.

“There were, however, a few yechidei segulah who were determined to keep Shabbos. They kept Shabbos, and they realized that it wasn’t pikuach nefesh. They found that they could do it. The rest of Klal Yisrael learned from them that Hashem takes care of those who keep Shabbos. They learned that it can be done.

“In the ’60s and ’70s, Rav Menachem Mendel Mendelson z”l, founder of Keren Hashviis, tried to convince people to keep shemittah. It was almost impossible. Everyone looked at him like he was a meshugene. ‘You expect people to close shop for a whole year?’ they said. ‘How will they live?’

“But there were some strong-minded farmers who listened and started keeping shemittah. Slowly but surely, every shemittah since then the number of those willing to keep the halachos increased, and those farmers’ friends and neighbors saw that it can be done. Not only that, they saw that many of those who kept shemittah had special hatzlachah.

“What’s happening this year is that the farmers are coming to us and saying they want to keep shemittah. Because of that, the amount of land committed to keeping shemittah went up from 330,000 dunam last time to 519,000 already committed for this time. We have a goal of 680,000 dunam, which is over half of the privately owned farmland in the country. This is truly unbelievable.

“The only problem is that every farmer who commits to keeping shemittah is given a grant from Keren Hashviis to help him survive the year, and we cannot commit to providing the grants unless we have the money in our hands. The farmers are ready to keep shemittah. But they need American Jewry to stand with them and give them the ability to do it.”

R’ Shia Markowitz, a veteran askan and the CEO of Keren Hashviis, points out that there is a common misconception that observing shemittah is the farmer’s mitzvah and world Jewry helps them perform their mitzvah by donating to Keren Hashviis. The truth is that everyone is obligated to rest the land, not just the farmers. Shemittah is Klal Yisrael’s mitzvah.

The Netziv explains this clearly in Sefer He’emek Davar. He says that although the prohibitions of working the land on the seventh year only apply to those who own land in Eretz Yisrael, the mitzvah of “v’shavsa ha’aretz—and you shall rest the land” applies equally to all members of Klal Yisrael.

Additionally, the Torah promises “v’tzivisi es birchasi” and “b’motza’ei sheviis ben Dovid ba” to all those who observe shemittah. This is the only mitzvah in the Torah that comes with such amazing brachos. The only way one can merit these great blessings is by taking a share in the mitzvah of shemittah.

Recently, a Jew from England asked Rav Chaim Kanievsky shlit”a the following question: The Torah promises that everyone who observes shemittah will be blessed with the bracha of “v’tzivis es birchasi.” If so, why do we need to support the farmers? Aren’t they already guaranteed support from Hashem?

Rav Chaim answered that shemittah is such an important mitzvah that Hashem wants everyone to be a part of it. Therefore, He does not send the blessing directly to the farmers. Instead, He sends the bracha to Yidden in England and America and around the world. He gives them financial resources to be able to participate in the mitzvah of shemittah by sending the money back to the farmers.

To provide Yidden around the world with the opportunity to fulfill the mitzvah of shemittah and receive its blessings, Keren Hashviis offers the opportunity to sign a shtar shutfus with a farmer. With this shtar, formulated by gedolei Yisrael and Keren Hashviis’s legal team, one becomes a genuine partner, both legally and halachically, in the ownership of a piece of land in Eretz Yisrael. When his land lays fallow during shemittah, the partner fulfills the mitzvah in its most ideal way.

As R’ Shia says, “The bottom line is that we all have a mitzvah to ensure that the land rests. In order to reach the goal of 680,000 dunam, we still need 10,000 more shtaros at 1,200 dollars a shtar, or a total of 12 million dollars in donations. If we reach this goal, we can tell Hashem that we did what we could—we rested over half of the land. Ruvo k’kulo—the majority is like the whole! We will be able to say that 3,9000 farmers rested their land during shemittah—more than in any shemittah since Churban Bayis Sheini. Chazal say that ben Dovid will arrive on motza’ei sheviis. We will be able to say that we did our part, and we are ready for him!”

Another unprecedented aspect of shemittah 5782 is that it is arriving right after one of the most difficult years for farmers ever. During COVID, many farmers were unable to sell their produce. When they were allowed to sell in Israel, many were still unable to export abroad. When they finally were allowed to export, the market became so flooded that prices plummeted, causing major losses. Many farmers are entering the year of shemittah with huge debts that were accumulated over the past year; they are losing their business for the second year in a row.

As R’ Shia points out, “During COVID, many of us were deeply concerned because we were forced to close our businesses for several months. We couldn’t even imagine closing for a year, much less for two.

“The farmers were tasked with the mitzvah of shemittah because they are closest to Hashem on a daily basis. When they plant seeds and see how Hashem makes them grow, they become very connected to Him. They understand that they are totally reliant on Hashem for their crops to grow and be harvested. We, however, are not as closely connected to Hashem and do not have the emunah that they have. We could not withstand the nisayon even for a month. The least we can do is answer the pleas of the farmers, who are doing our mitzvah, and partner with them, helping them pass the nisayon of this shemittah.”

In just a matter of weeks, we will wish “Good Shabbos” to Eretz Yisrael as we usher in a new shemittah year. In the merit of partnering with the farmers in Klal Yisrael’s mitzvah, we pray that we will soon greet the yom shekulo Shabbos.